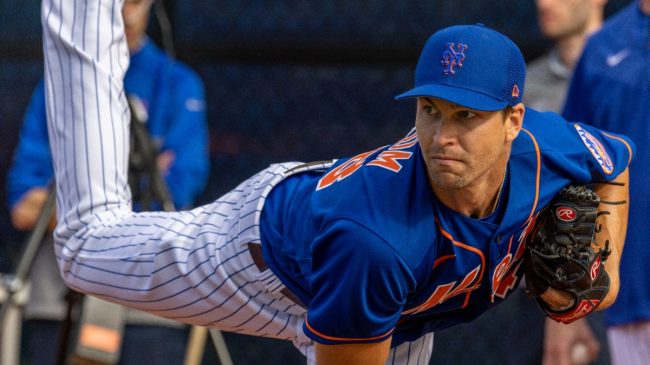 The more things change, the more they stay the same. That’s never been truer than when looking at the Mets’ offensive production when ace Jacob deGrom is on the mound.

The star pitcher has been one of baseball’s best since entering the league, notching a pair of Cy Young awards and a Rookie of the Year honor. But he has little to show for it in the win-loss department.

Since 2018, the righty has posted an insane 1.94 ERA over nearly 600 innings. That is the top clip of any starting pitcher over that time. One would think it would result in a massive gap in wins and losses.

The Mets have had a knack for providing little run support in deGrom’s starts, then having the bullpen blow games late. That was expected to change this year with the pitcher returning to a first-place team with an offense that ranks fifth in the majors in both average and runs scored.

But, to Mets fans’ dismay, the trend remained.

Fans react as the Mets give Jacob deGrom no run support

After a rocky final rehab start, deGrom shined in his Mets debut. The righty tossed five innings, allowing one run, striking out six hitters, and topping 102 MPH on the radar gun.

But New York again gave deGrom no run support, a feat made worse by the fact that they were facing the 35-69 Nationals. Take a look at the immediate reaction around the MLB world.

Jacob deGrom: "Y'all wanna give me some run support?"

are any of us shocked that jacob degrom didn’t get any run support?

Mets fans seeing the team be unable to get deGrom run support. 😅 pic.twitter.com/wFm7LIeaoH

DeGrom can't get run support from the Mets even after they spent a whole year overhauling their offense and have become a top 5 team.

This stat pretty much sums it up.

Mets Jacob deGrom has received 1 run or fewer of run support in 34.1% of his career starts (Including tonight)

Hopefully, the Mets can reverse this trend as the season continues.