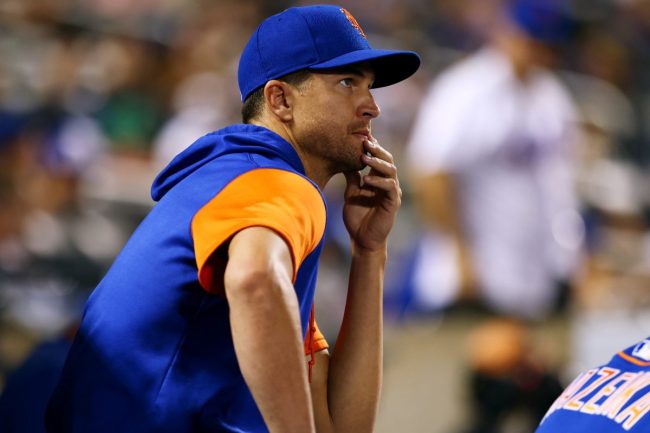 Mets fans are not doing well after seeing ace pitcher Jacob deGrom allow a pair of bombs in his latest rehab start. The flamethrower is hoping to make his return to the big-league level after missing the entire first half of the season with an injury.

He took the mound for his fourth start at the minor league level Wednesday afternoon, a rehab start that is expected to be his last. Manager Buck Showalter talked about his Cy Young winner’s status earlier this week.

But after seeing what the Omaha Storm Chasers have done thus far, Mets fans are wondering whether deGrom needs more time before making his MLB return.

Jacob deGrom allows a pair of HRs in rehab start

Jacob deGrom has gotten off to a rocky start in his latest rehab start, surrendering a pair of absolute bombs to Omaha hitters. Both came in the second inning, giving the Storm Chasers an early 4-0 advantage.

Brewer Hicklin started the scoring by taking deGrom DEEP to left field with a solo shot. Take a look at this moonshot.

.@brewerhicklen doesn’t care how many Cy Youngs Jake DeGrom has 😏

Hicklen hits a long home run to give us the early lead pic.twitter.com/QUtE5Nk6wW

Three batters later, following a pair of deGrom walks, Drew Waters went oppo for a three-run homer to add to the damage.

We want the NL-East!@dwaters121 hit a 3-run shot off deGrom and we are happy in Syracuse pic.twitter.com/l8i7Hj2BSl

The Mets’ ace finished with a final line of 4 IP, 4 ER, 3 BB, 2 H, and 6 Ks. While he only allowed a pair of hits, both of which left the yard, deGrom struggled with his command. He walked three hitters over four frames and threw 67 pitches.

The subpar performance had folks talking on social media.

@TStarkWayne2 just what you wanna see in his last rehab start https://t.co/sg4YuwsFCy

Officially switching to we will not see him this season, and possibly ever again. Any time I ever see Jake in the major leagues will just be a bonus

While it’s not what you want to see before deGrom’s MLB debut, he’s not the first ace to get knocked around in the minor leagues. Chris Sale was seen wrecking a minor league clubhouse after pitching poorly in a recent rehab outing.

Often, the results in these games have little impact on the major league outlook. The righty is expected to return in early August to face the Nationals. Hopefully he’ll be able to flush this performance from his system.