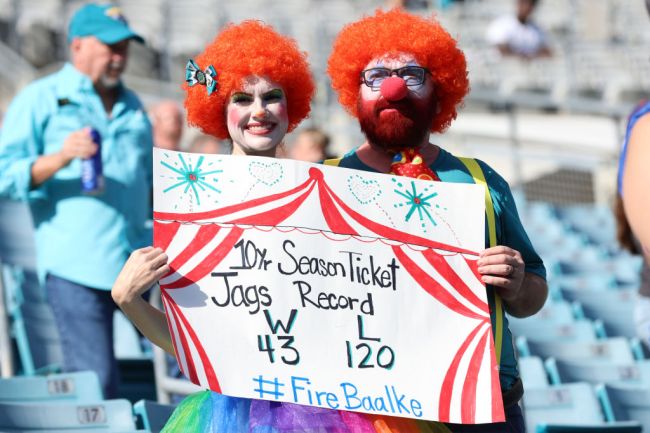 Jaguars fans followed through on their promise to show up to their game on Sunday dressed up as clowns to mock the franchise.

Jags fans are planning to dress up as clowns for the season finale to protest ownership decisions and they’re flooding the replies to every team tweet 😂🤡 pic.twitter.com/IoRFKymCYc

Frustrated fans are revolting against the Jaguars and have Khan in their crosshairs.

Hundreds, if not thousands, have changed their social media profile pics to a clown donning Khan’s signature mustache. And they’ve started replying to every Jaguars post or live feed with countless clown emojis. Next up: They’re planning to don clown costumes – red rubber noses, face paint and colorful wigs, at the very least – when the Jaguars (2-14) host Indianapolis (9-7) at TIAA Bank Field on Sunday.

The goal is to persuade Khan to fire general manager Trent Baalke, whose reputation and repeated mistakes have been under the microscope since NFL Network reported that Baalke would be retained in 2022 and would assist in the team’s coaching search.

We now have video/images of Jags fans dressed up as clowns on Sunday, and it’s hilarious.

Last one of the season #dtwd pic.twitter.com/DxgPEGp20F

Just another day out at the football. pic.twitter.com/zbmMd5w7eE