Jake Arrieta Absolutely Blasted His Teammates, Including Bryce Harper, For Their Effort In Loss 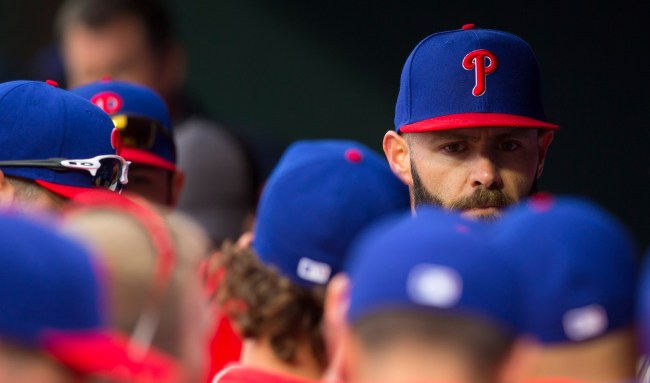 Philadelphia Phillies pitcher Jake Arrieta has very little filter when it comes to speaking his mind on things. He rarely holds back, even if what he has to say might cause some controversy.

So, after the Phillies lost 5-1 to New York on Monday night, dropping into a tie for first place with the Mets at 12-10 on the season, Arrieta made it very clear that he was not happy with the effort he felt his teammates gave, and in particular was upset that Bryce Harper got himself ejected in the fourth inning for arguing balls and strikes with home plate Mark Carlson.

Bryce Harper was just tossed from the game and was not at all happy with the umpiring crew pic.twitter.com/HDkoI36e5D

After the game, Arrieta lit into his Phillies teammates, saying, “The dugout was flat. The defense wasn’t good. Didn’t throw the ball well as a staff overall. We got beat. We started at 8:45 [after a rain delay]. I don’t think our guys were ready to play. We’ve got to come out tomorrow ready to play. I’m out there doing everything I can to win a game. I need my guys behind me, and they weren’t.”

“I’m not happy with the way we showed up today,” said Jake Arrieta, who added that he didn’t believe #Phillies were ready to play after 95-minute rain delay at the start.

As scathing as that assessment was of his teammates, Arrieta saved his best blasts for the Phillies’ new $330 million man, Bryce Harper.

“Look, I mean, he’s got to understand we need him in right field,” said Arrieta. “I don’t care how bad [the umpire] is. He wasn’t great for either side. I’m out there trying to make pitches, and he misses some calls. So what? We need him out there.”

Yikes. Soooo… the Bryce Harper-Phillies honeymoon is officially over, I guess?

Meanwhile, Andrew McCutchen, who went 0-for-4 with two strikeouts in the leadoff spot, said after the game that the loss was his fault.

That’s on me. Gotta play better.