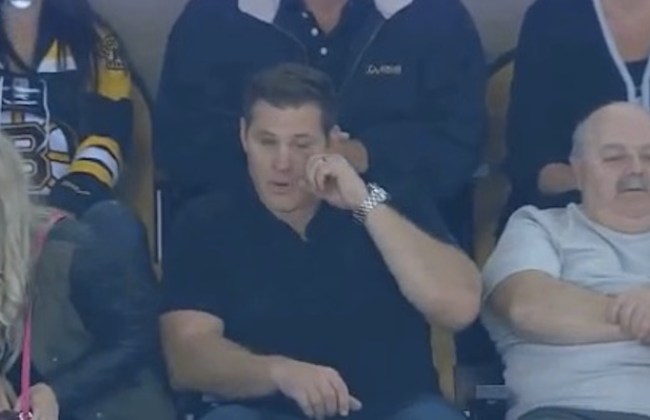 20-year-old Jake DeBrusk scored his first NHL goal last night. The 20-year-old Boston Bruins Forward found the back of the net in the second period. Jake’s dad was in the stands to see his prodigal son score his first professional goal, and things got dusty up in the stands in a hurry. Jake’s dad was an NHL enforcer who appeared in over 400 NHL games in his career, so this was a huge moment for him.

And here’s the reaction by Jake’s dad, captured in GIF by Pete Blackburn who’s now at CBS Sports:

Jake DeBrusk’s dad tears up after watching his boy score in his NHL debut pic.twitter.com/IARZmZsx4H

After Jake scores, the camera captures his dad as he starts tearing up, and this is just a rush of emotion I didn’t expect to feel while watching an NHL game that didn’t involve my beloved Tampa Bay Lightning. I’m no Boston fan. And on the same night that Boston’s NFL team beat my Bucs by 5-points (LOL @ the 5.5pt spread, f’n Vegas!!!) I find myself feeling sympathetic towards a Boston sports franchise.

I missed hockey so much this offseason after the Bolts fell short. I can’t f’n wait for that first puck drop tonight. It just feels right.