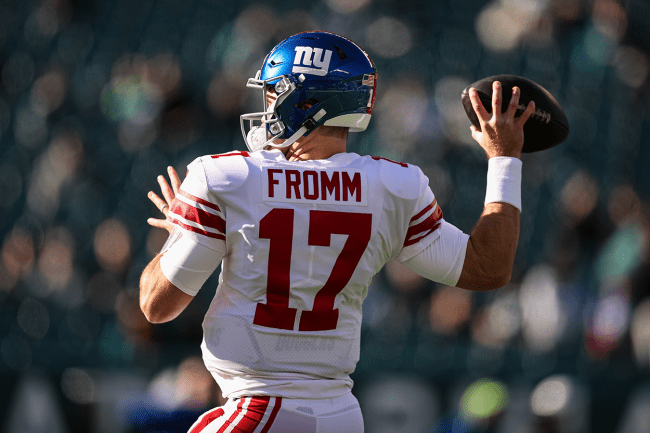 Jake Fromm forwent his senior season at Georgia to enter the NFL Draft and was selected No. 167 overall in the fifth round by the Bills. However, he didn’t stick.

Fromm signed a four-year deal with Buffalo in 2020 and was released prior to the 2021 season before signing to the practice squad. A few months later, after a significant need developed at the quarterback position in New York, Fromm signed with the Giants.

He made his first-career start in Week 16 against Philadelphia and did not do much in 2022. He threw for 25 yards on 17 attempts with one interception and finished the year with 27 completions for 210 yards with one touchdown and three interceptions.

Needless to say, Fromm has not been particularly impressive on the NFL level. As a result, he was non-tendered by the Giants earlier this month and is currently a free agent.

As he seeks his next opportunity to return to the National Football League, Fromm is putting in the work with one of the nation’s top quarterback coaches. QB Country, founded by former Ole Miss quarterback David Morris, is a team of 11 former quarterbacks who work with current high school, college and NFL quarterbacks in the South.

Fromm recently joined QB Country for three days of work and appears to have made significant strides in a training video that has recently gone viral.

In the video, Fromm looks sharp. His arm angle is closer to 90-degrees, which was something that has always been a concern for the former Bulldogs quarterback, and his release point is not only right where it should be, but the ball comes out quick.

Additionally, Fromm appears to have rid himself of his ball-flipping habit. He is not doing too much in the pocket and is delivering sharp, on-target throws with significant velocity.

Looking better than ever. pic.twitter.com/C6M0JFIy7P

While three throws from an offseason workout is obviously a small sample size, the short clip gives a really good look at what Fromm has been working on. There is not a high probability that Fromm ever develops into a certified Super Bowl-winning superstar, but if he can continue to work on his craft, he could be a viable backup throughout his career.