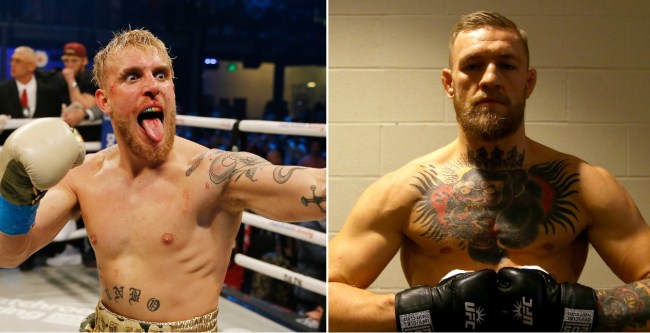 Is Jake Paul vs Conor McGregor a fight that could actually happen?

Jake Paul being very gracious in victory. No trash talk towards to Robinson.

Paul says he is interested in “Conor McGregor, Dillon Danis” next, says he’d knock both out.

After knocking out former NBA star Nate Robinson tonight, @jakepaul says he wants @TheNotoriousMMA and/or @dillondanis next and predicts he’d knock both out. (📽 @triller) pic.twitter.com/eubdl9j3kE

On Monday, Paul spoke with TMZ and revealed that his team has already reached out to McGregor’s camp and they have already begun talking about a potential fight. Of course, Paul goes on to say that that he’s going to “fuck, Conor McGregor up” during the interview.

Jake Paul says he’s already reached out to Conor McGregor’s camp to start negotiating a boxing match with the Irishman … saying, “I’m going in there to f**k Conor McGregor up.”

The 23-year-old called out Conor after destroying Nate Robinson on the Mike Tyson undercard over the weekend — and while many scoffed at Jake’s comments, Paul tells TMZ Sports he’s dead serious.

“My team is talking to his manager but that’s all I’ll say,” Jake said with a smirk.

Then came the smack talk …

“No other fighter with this big of a platform is calling out McGregor. My dogs have more followers than the guy he’s fighting in January.”

McGregor is currently set to fight Dustin Poirer in January in the UFC and has reportedly committed to fighting Manny Pacquiao sometime in 2021, so we’ll see if he can fit in Jake Paul in his busy schedule.