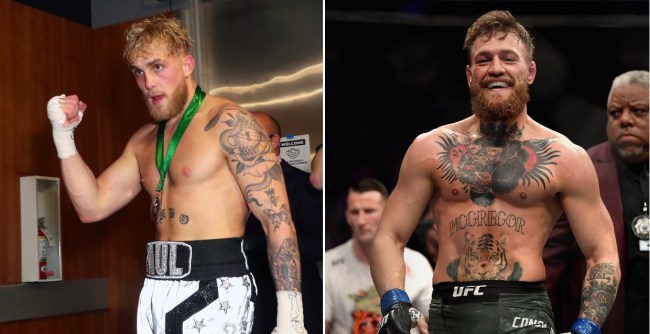 Jake Paul has always been cocky but he might be letting his knockout against Nate Robinson go to his head.

On Saturday night, Paul went viral after viciously knocking out the former NBA star in the second round of their fight.

After the viral KO, Paul called out MMA superstar Conor McGregor and his teammate Dillon Danis to a fight.

Jake Paul being very gracious in victory. No trash talk towards to Robinson.

Paul says he is interested in “Conor McGregor, Dillon Danis” next, says he’d knock both out.

After knocking out former NBA star Nate Robinson tonight, @jakepaul says he wants @TheNotoriousMMA and/or @dillondanis next and predicts he’d knock both out. (📽 @triller) pic.twitter.com/eubdl9j3kE

The Internet immediately mocked Paul for even bringing up McGregor’s name in a potential fight.

Jake Paul thinks he just earned a Conor McGregor fight. Also says he passed out while meditating and broke his nose before the fight. And he just announced his latest single. I quit 2020.

Jake Paul: "There’s a long list of opponents I want. Conor McGregor, Dillon Danis, I’m going to knock them both out.” #TysonJones pic.twitter.com/au0aNSTyvC