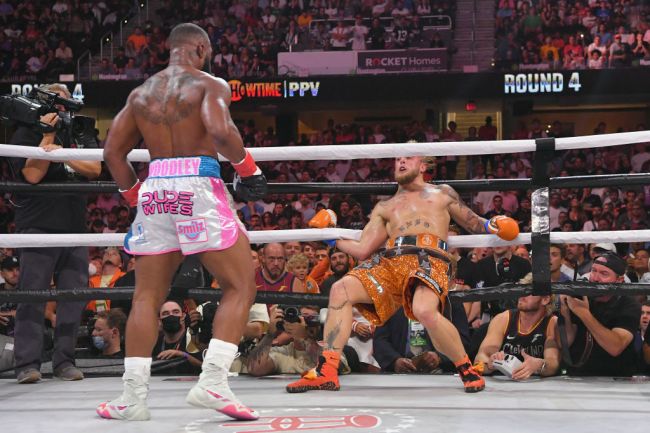 Over the weekend the Youtube star went toe to toe with former UFC champion Tyron Woodley and got hit hard a few times during the fight.

And you straight bsing me and telling me Jake Paul won, Tyron Woolley looked into Jake’s soul at that exact moment #rigged pic.twitter.com/5pYfIB9MLJ

Paul went on to win the fight but admitted that he felt a bit tired after the fight but that he was going to regroup and come back to decide his future.

On Monday night, Paul tweeted out that he’s now a “retired” boxer.

Fans had some hilarious reactions to Jake Paul retiring from boxing.

This man tasted the power of a pro fighter for the first time in his life and fucking dipped LMAO https://t.co/9ddlxe4BfR pic.twitter.com/8szDlmySrg

Shoutout to @TWooodley for ending this muppets boxing career 🙌 man got hit by a real fighter and found out he's not about that life https://t.co/DxN0eOcECA

he found out how it feels to get hit by a real fighter and decided he ain’t want no business with fighting anymore 😂 https://t.co/zgSa2EJs7s