Jake Paul Rips The UFC And Dana White To Shreds Over Poor Fighter Pay ‘These Fighters Are Risking Their Lives, They Need To Be Compensated’ 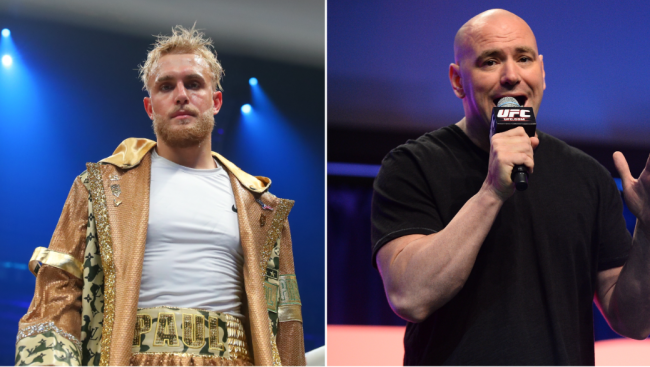 Jake Paul continues taking shots at Dana White and the UFC over the way they conduct their business.

On Thursday afternoon, Paul made an appearance at the legendary 5th street gym in Miami to promote his upcoming fight against former UFC champion Tyron Woodley.

The 5x UFC champ wouldn’t take the bet🤡 @TWooodley you don’t have enough confidence to put your money where your mouth is🤡😭 pic.twitter.com/wF3gxc5Zql

During the event, Paul spoke to the media and blasted Dana White and the UFC for exploiting their fighters by not paying them enough.

Jake Paul calls out the Dana White and the UFC over poor fighter pay “These fighters are risking their lives, you can quite literally can die in the ring, they should be compensated more… Fuck Dana White” pic.twitter.com/qqoK4Bcvbl

“I think there’s a movement moving forward that is going to show that fighters should be getting paid more. It’s unfair that UFC fighters don’t have fair pay, out of all the sports the percentage that the owners get vs the athlete, they’re the lowest. Francis Ngannou vs Jon Jones that fight should happen, Dana White pay them the $10 million, he’s taking their money, they’re the ones making the content, they’re the ones getting in the ring risking their life…These fighters are risking their lives, you can quite literally die in the ring and they need to be compensated more”

Paul was then asked why he thought no one in the UFC has spoken out against the organization over fighter pay and he says it’s because everyone is afraid of Dana White.

“Because no one else can talk shit to Dana because he’ll just sideline them and they’re fucked.I’m the only one who doesn’t need Dana White in the fight world, everyone else needs Dana White, everyone is scared of him, I don’t give a fuck about him”

White will probably not be happy when he hears Paul’s latest comments about the UFC.