Jake Paul Says Tyron Woodley ‘Will Be Dropped By A Disney Star In Two Rounds’, Woodley Fires Back 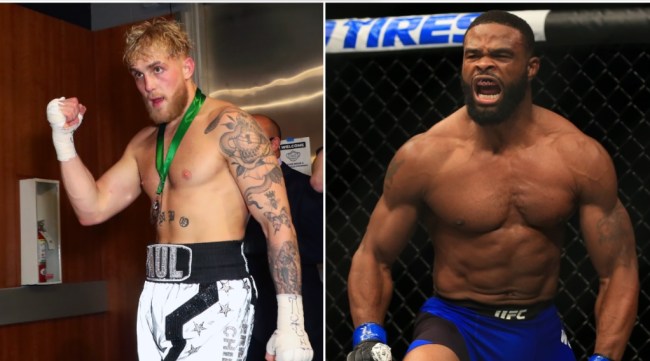 “It’s official have a list of people I plan on knocking out and as I enter my fourth pro fight, I am excited to cross the first one off the list by challenging myself against @twooodley a 5 time UFC Champion known for his knockout power. Tyron ran his mouth a little too much in the locker room when I knocked out his best friend Ben and earned himself a top spot on the Problem Child death list. Tyron’s a seasoned striker who has fought the best MMA fighters in the world but will be dropped by a Disney teen star in 2 rounds.”

Paul also had some choice words for UFC President Dana White, who is accused of reneging on a $2 million bet prior to the Paul-Askren fight.

“Maybe this time Dana White will actually be a man of his word and put his money on his former champion instead of trying to undermine my success like a jealous ex.”

As for Woodley, he also seems confident in his ability to knock out Paul. In a statement to ESPN’s Ariel Helwani, Woodley calls the fight against Paul the “easiest of his career” and vows to get rid of the Youtube star for the MMA/boxing community.

Easiest fight of my career & biggest purse of my career all in one night. Basically, they brought me in to take out the trash. Can’t wait to shut this b*tch up. This is getting done for the culture, the whole MMA/boxing community, to rid this guy of combat sports.”

The fight between Woodley and Paul is set to take place on August 28th on Showtime at a location to be named later.