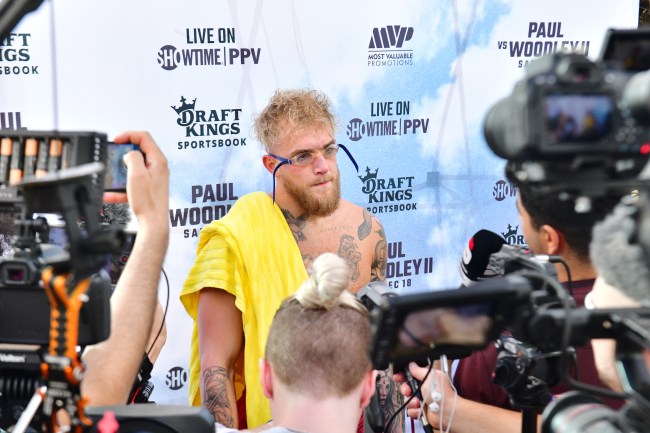 Jake Paul is currently preparing for his rematch with Tyron Woodley on Saturday, but he’s already looking at what could come next. He let it be known at yesterday’s open workouts that he has his sights set on a few potential opponents for his future.

There’s one matchup in particular that could heat up this weekend. It just so happens that Chris Avila, who is trained by Nate Diaz, will be fighting Paul’s sparring partner, Anthony Taylor on Saturday night.

“Look, there’s a lot of sh*t talk going back and forth, and I would love to make that fight happen, if it’s even possible. I know he’s with the UFC, so whatever happens will happen. But that’s a massive fight, and I think the people need to see that one. I’ve got to get through Tyron, maybe Tommy [Fury]. Who knows? Maybe Nate Diaz, maybe Conor McGregor. The road path is massive right now.”

Paul also said he expects there to be some trash talked between him and Diaz when they cross paths this weekend. Any friction between the two on Saturday would continue to build hype for the most interesting fight available to Paul.

The fight with Diaz is one that has been gaining steam recently with the two beefing on Twitter.

Diaz only has one fight left on his contract and then would be free to pursue a boxing match with Jake Paul.

Some believe the UFC is waiting for Conor McGregor to return so they can set up a trilogy fight between him and Diaz, but Diaz’s last fight could come sooner if him and Dustin Poirier are serious about fighting each other.

The other key factor here is Jake Paul needs to beat Tyron Woodley on Saturday. Their first fight went to a split decision and Woodley had his moments in the fight. If Paul loses to Woodley then a trilogy is the obvious next fight.

If Paul wins, especially with a finish, then the Diaz fight gets even more interesting.

There will be a lot on the line Saturday night.