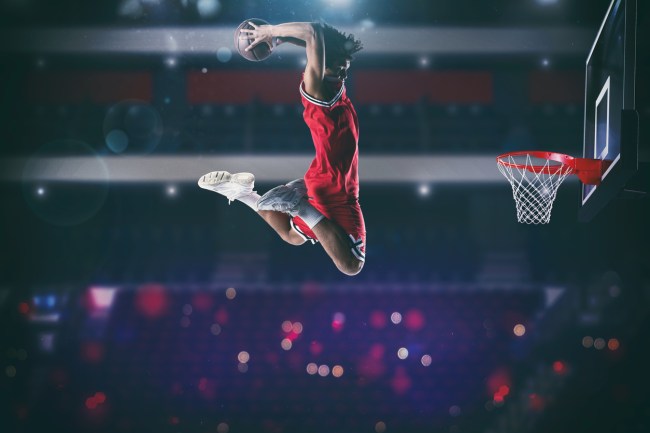 Ja’Kobi Gillespie signed with Belmont basketball in November and is set to make an immediate impact on the Bruins program. The 6-foot-1, 165-pound guard is finishing up his senior year and threw down one of the best in-game dunks that you will ever see on the high school level.

Gillespie and the Greeneville (TN) Greene Devils hosted Knox Hall in the class 3A State Sectionals on Monday night. They dismantled the Red Devils by a score of 86-24.

In the game, Gillespie dropped 26 points and put on a show late in the second half. Off of the fast break, Reid Satterfield and his star guard teammate were out in a two-on-one situation.

As the rest of the defense tried to catch up, Sattefield bounced an alley-oop off of the floor with enough height and velocity to reach the hoop. On the other end, Gillespie went up, grabbed it with his right hand and threw it down.

The dunk was incredibly athletic and something straight out of the Harlem Globetrotters. After the game, both Gillespie and Satterfield that they never practiced the alley-oop. It was just something that happened in the spur of the moment and led to greatness.

The student section, like the rest of the fans in attendance, lost its collective mind. Their reaction is priceless.

I just love the reactions from the student section in this @BryanjCannonPho photo as Ja'Kobi Gillespie goes up for the dunk of the night. pic.twitter.com/YA3waiaVnt

Gillespie and Greeneville will play Jackson North Side in the state playoffs on Tuesday, March 15. Can they follow up their dunk with something even better on a bigger level?