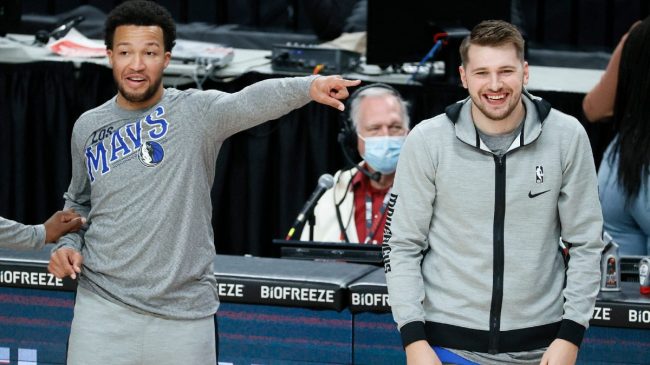 The Dallas Mavericks are gearing up for a run in the NBA Playoffs.

The Western Conference’s No. 4 seed, they’ll face off against the No. 5 seed Utah this weekend. It should be an entertaining series, but the lead up to game time might be a little irritating for one Mavericks star. At least if one of his teammates decides to take the aux cord.

Jalen Brunson was jokingly asked by a fan on social media about having to listen to Luka Doncic’s playlists at practice. The question was accompanied by a clip of Doncic on the stationary bike, presumably stretching out a calf injury that will sideline him for the first game of the playoff series.

Brunson and Doncic Chime In On

Brunson gave a simple, yet hilarious, response as to how he’s able to productively practice while listening to Doncic’s tunes.

I guess he’s not a huge fan of the club music that was blaring across the arena speakers.

Doncic quickly quipped back in disbelief of the reply, just saying, “Wooow.”

The joking exchange was great to watch unfold on Twitter. These two won’t care what music they’re listening to at practice if it means that the season continues past the first round of the NBA Playoffs.

The best of seven series with the Jazz is set to begin on Saturday with game one scheduled to tip off at 1 PM ET.