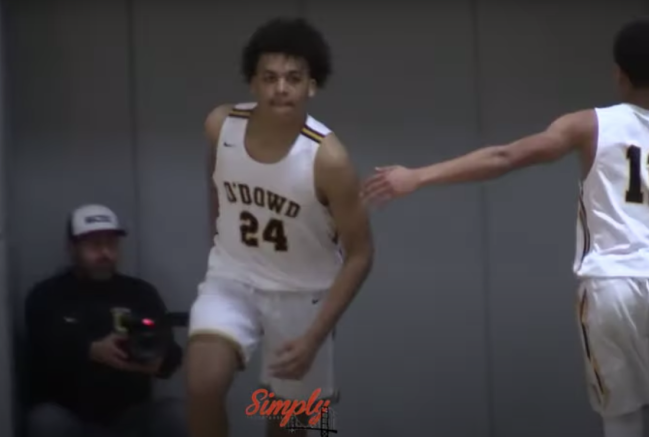 With just one signature, Jalen Lewis just made history, becoming the youngest pro basketball player ever in the United States. A top college basketball recruit in the class of 2023, the center from Bishop O’Dowd High School in Oakland earned bragging rights over ever other prep superstar, inking a $1 million contract with the new Overtime Elite league. The league launched this past March as an alternative for elite prospects, promising a six-figure salary or better, with possibly equity.

So while the NBA disallows high school players from entering into the league straight from high school these days — something we’ve previously seen superstars like LeBron James, Kobe Bryant and Kevin Garnett do, among others — Lewis upped the ante with his decision to join Overtime Elite.

Unlike those other players, Lewis isn’t a graduating high schooler, but, instead, still just a 16-year-old sophomore. So the decision to get paid now rather than finish his final two seasons in high school is a groundbreaking one.

For those wondering just how good this kid can be — and why Jalen Lewis’ contract is for $1 million — here are some highlights from his first two high school years, per Simply Basketball.

Prior to Jalen Lewis’ contract with Overtime Elite, the blue-chipper had been weighing his college basketball decision, and actually received offers from programs like Kentucky, Kansas and UCLA, among others. But the center’s choice to turn pro with the $1 million deal all but guarantees he’s preparing himself for a chance at the NBA in the next few years.

We’ve already seen other top college basketball recruits head to the Overtime Elite league as well, with a pair of five-star prospects — West Oaks Academy’s Matt and Ryan Bewley — deciding to join the new league in May of this year. With Lewis joining those two top prospects, it’s clear prep stars are starting to take more control of their futures.

Whether you agree with the decision of Jalen Lewis or not, the 16-year-old saw an opportunity to earn $1 million from Overtime Elite and took it. Rather than risk injury by playing high school, he’s basically entering an expedited Master’s program in basketball, and will get a chance to develop in a pro league before possibly trying his luck in the NBA.

Between seeing this 16-year-old go pro and the new NIL rules for college athletes, we sure are living in a different world today than just a few weeks ago, huh?