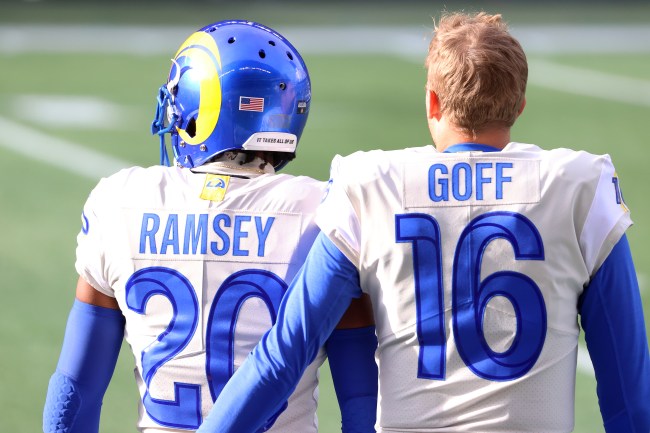 Jalen Ramsey doesn’t care that the Rams already have a QB, he’s going to out of his way to try to convince Deshaun Watson to come to LA.

On Saturday, Ramsey was seen on Watson’s Instagram comments trying to lure him to come to LA.

Ramsey’s recruitment of Watson is a bit awkward considering the Rams already has a QB in Jared Goff.

Goff own teammates don't respect him in crying https://t.co/euYWnorrVJ

As for Goff, it’s unclear what his future looks like in LA after coming off a disappointing season.

We know John Wolford came in, and they were excited about him when Jared Goff got hurt and the way he performed, and then he got hurt,” Wyche explained. “So I think a lot of people are wondering if they’re going to bring in a veteran type of quarterback to push Jared Goff this offseason. Or at least have that threat there as a backup to see if they can elevate Goff.

“The people I’ve spoken to said basically at this moment the relationship with Goff and McVay: not great. They need marriage counseling is what one person said to me. I think this is something that they’re going to be able to work through, but there’s got to be some healing and that’s not just with Jared Goff’s injured thumb.”

Obviously, the Rams would prefer to pick up Watson this offseason but it’s doubtful they have enough assets to trade for him. It’s still pretty disrespectful of Ramsey to be throwing his teammate under the bus by recruiting another QB to the team.