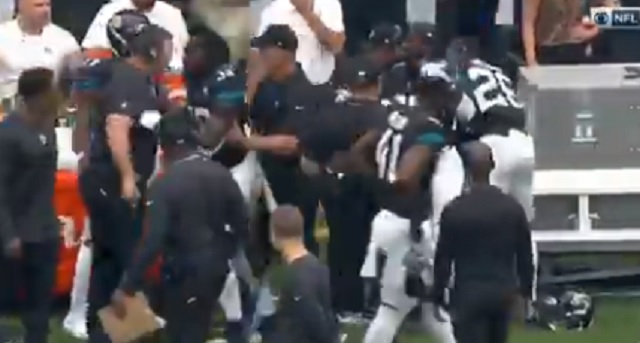 During the first quarter an angry Ramsey was seen yelling up and down the sideline.

Marrone then walked over to Ramsey and said something to him which led to other Jaguars players getting in-between the two.

Things getting heated on the Jacksonville sideline 😳 Jalen Ramsey and head coach Doug Marrone had to be separated pic.twitter.com/XpfDjjnfGi

It’s unclear what prompted the confrontation but of course the Internet had some interesting reactions.

You know things are getting crazy on an NFL sideline when the head coach has to be pulled back. Apparently, Jalen Ramsey already melting down and it's not even halftime #Jaguars #Texans pic.twitter.com/clU9UyICB8

That dude @jalenramsey is basically @RSherman_25 without the charm. It's like watching what would happen if Sherm didn't have great parents and more social awareness. I

When is jalen Ramsey ever happy? https://t.co/CFVM0UxYrC