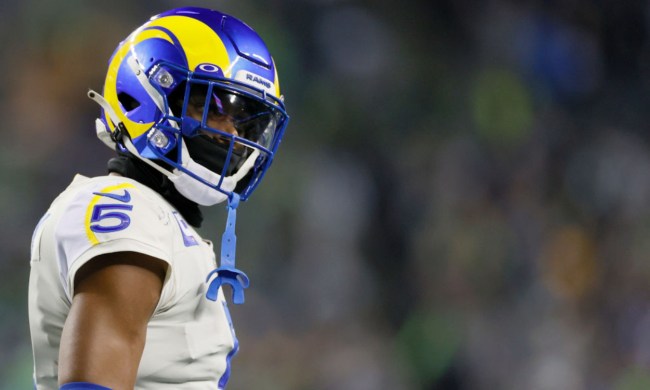 With Tom Brady officially announcing that he’s retiring from the NFL, reactions and tributes have been flooding social media. Sports fans, media members, athletes from around the world, and even reactions from current NFL players have poured in.

Jalen Ramsey may just have the greatest reaction to the Brady retirement news though.

The Los Angeles Rams defensive back jumped on Twitter to somewhat roast himself pointing out that Brady’s final touchdown pass came against him.

During the NFC Divisional round, Mike Evans got the best of Ramsey in coverage and Brady found him for a TD late in the fourth quarter.

The best QB of all time retired, DANG… he threw his last TD on me 😂

Ramsey of course got the last laugh as the Rams won the game and are getting set to take on the Bengals in the Super Bowl.

The former Florida State standout is paid to not allow touchdowns, but it’s safe to say he’ll always remember Brady throwing his last TD while he was covering Evans.

It’s honestly a pretty cool story that Ramsey will always be able to tell his friends and family. Only one person can ever say they were guarding the receiver Tom Brady threw his last touchdown pass to.