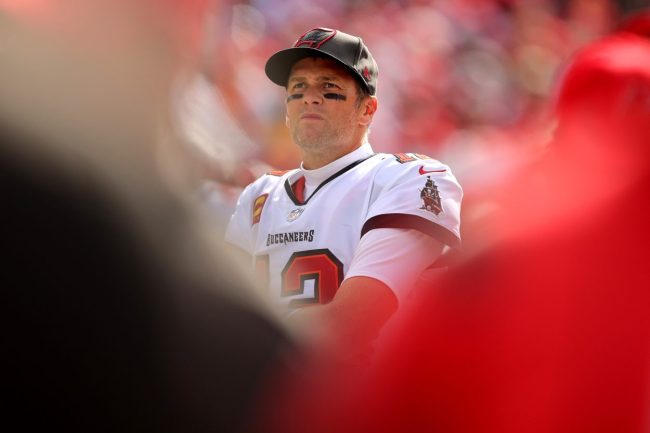 After 22 years in the NFL, the greatest quarterback of all-time is officially calling it a career. Tom Brady has announced that he is retiring from football and NFL fans are experiencing all kinds of emotions.

After being selected in the sixth round of the 2000 NFL Draft, Brady has had a remarkable career. He will hang up his cleats with seven NFL records to his name and seven Super Bowl rings.

To put his career in perspective:

With the news, NFL fans are all over the board. Some of them are sad to see the G.O.A.T. retire, others are glad to see him go so that their teams will not have to play him in the future, many had jokes, and then, of course, there are the irrationally angry who are lashing out against Brady for no reason.

Nothing encapsulates truly how long the Tom Brady era lasted quite like his Madden character evolution 😱 pic.twitter.com/1jkKEqOYWy

🐐 @TomBrady thank you for the memories pic.twitter.com/pA6MKrsVRK

I wonder if Tom Brady will eat real food again

Tom Brady I wish u a great retirement from a Jets fan that you torched for years. 😭

Mans retired twice in one week.

No other QB could ever.

Tom Brady retired without a hype video, I for one am SHOCKED.

Thanks for the memories https://t.co/6j0TgNiatS

it had to happen eventually but that doesn’t stop it from feeling weird as hell https://t.co/FlfMDCbxoF

Football without Tom Brady for the rest of my life pic.twitter.com/IzN5LnQX7N

Thanks for the memories, Tom Brady! pic.twitter.com/PcvswhKdBf

Tom Brady has been around so long, that we are not sure if this was or was not a fashionable look back in 1995. https://t.co/aNNcjXiN3O

Tom Brady’s smart enough to get out before Matt Eberflus’ Bears take over the league for good.

NFL teams to Tom Brady after seeing the news that he’s retiring pic.twitter.com/V9MfXMFnzM

Tom Brady said for years that he was going to play until he was 45 but instead he retired after leading the NFL in passing yardage and passing TDs at 44 years old. coward/fraud

tom brady tasting a strawberry for the first time pic.twitter.com/PqU7Kyx7oU

The best Tom Brady throw you forgot about pic.twitter.com/6zgAr8Okv2

Regardless of where on the spectrum they stand, everybody is coming together to honor the best quarterback in NFL history and congratulate him on a historic career.

Forever a part of Buccaneers history.

Thank you for everything, @TomBrady. 🙏 pic.twitter.com/XkMON0SY8j

You did your job better than anyone ever has. Well done, my friend. pic.twitter.com/VW6PzTkTSB

🐐PERIOD!! Happy Retirement! THANK YOU FOR ALL THE GAME! @TomBrady pic.twitter.com/whEVMDW6CQ

The best ever. Congratulations bro @TomBrady grateful to have gotten to share the field with you! Much love fam 🐐

Thanks for the memories, babe. @TomBrady pic.twitter.com/lCqCVn13tI

Tom Brady was a starter for 20 seasons in the NFL.

Just think about that.

At 23 years old, Tom Brady is one of my first sports memories. What a run

Love him or hate him… you gotta respect the 🐐

The absolute greatest. Grew up watching Tom Brady play and sure won’t be the same without him. Great leader on and off the field, you will be missed! #TB12 💙 pic.twitter.com/REkxvHvitC

We are all so incredibly lucky to have watched Tom Brady play football.

Thank you, Tom. It was thrilling to see you do what you do. Best ever. BRAVO! Enjoy retirement. @TomBrady pic.twitter.com/SH7C21xELK

The first and last passes of Tom Brady's career. pic.twitter.com/Zs2KgTgcQx

The absolute greatest. Grew up watching Tom Brady play and sure won’t be the same without him. Great leader on and off the field, you will be missed! #TB12 💙 pic.twitter.com/REkxvHvitC

Tom Brady is the greatest ever. It was clear a few Super Bowl wins ago, but he just kept winning to leave no doubt.

Truly an unbelievable run. And he goes out as still one of the top QBs in the league.

tom brady *won the super bowl* 1/3 of the time he was a starting quarterback. a THIRD!

The greatest of all time 🙏 pic.twitter.com/VtCKf5O8Mo

If there was a Mount Rushmore of American sports history, Tom Brady’s face would be on it.

we all knew it would have to end eventually, but a small part hoped he really would play forever. thank you for the greatest two decades i could have ever asked for. 🐐 @TomBrady pic.twitter.com/gr1gYOzMEw

It is truly the end of an era. What a ride for the greatest to ever do it.