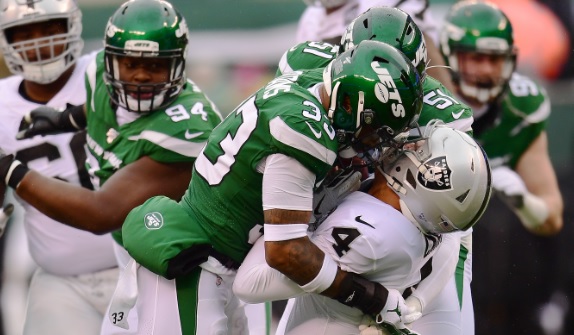 NY Jets safety Jamal Adams has always been a loud brash personality on social media and it seems like some people are turned off by that but he doesn’t seem to care.

After the Jets blew out the Raiders on Sunday, Adams posted a picture of himself delivering a big hit on Raiders QB Derek Carr.

Apparently, Adams’ gloating annoyed Carr’s brother Darren who called out the Jets Pro Bowl DB on Twitter which led to a back and forth between the two. .

Adams would go on to tell the elder Carr brother to stop living through his brothers’ success.

I understand you never made it to the big stage, but stop living through your brothas. You need to focus on your lil high school job… you got class to teach tomorrow! https://t.co/M11ZL3QmC2

Jamal, you are a heck of a player man. But I have 50 young men that have more respect for their opponent then you do. A “pro” making fun of a HS teacher/Coach. Had a heart problem & couldn’t play anymore, so thanks for brining it up.
*Its thanksgiving break brother, week off 😊

And Adams ended the convo by correcting the high school teacher’s grammar.

What kind of teacher uses *then instead of *than?! Grammar is important Mr Carr! Enjoy your week off! Luv https://t.co/rjMjAl47u2