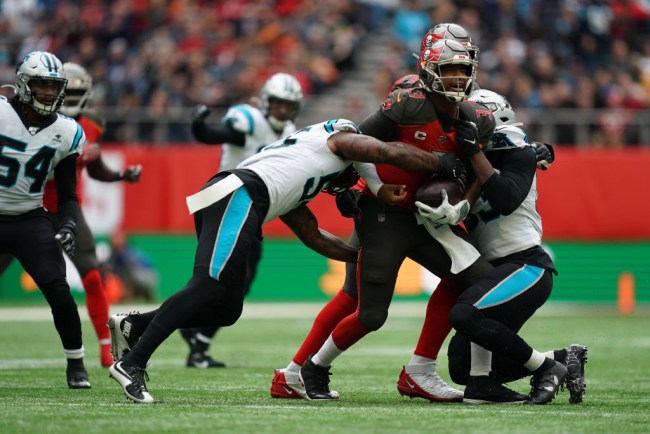 In case you decided to sleep in on Sunday morning and skipped the Buccaneers – Panthers matchup in London, you missed quite the performance from Jameis Winston as in he was flat-out bad. His consistently inconsistent play followed him all the way overseas.

Throwing an interception on the first play of the game was probably a sign that it wasn’t going to be a great day for Winston.

On the first play of the game…

Winston threw five interceptions and lost a fumble during the Bucs’ 37-26 loss. He went 30-for-54 through the air for 400 yards and one touchdown as well, but the five picks is the obvious stat that stands out. It’s tough to win football games when your quarterback throws five picks; he was also sacked a whopping seven times.

As per usual Twitter came out and roasted Winston after his horrible performance.

Jameis WInston is definitely playing against someone who is starting Jameis Winston in fantasy football today.

When you woke up this morning and realized you were starting Jameis Winston pic.twitter.com/XAXoc9dO8x

How many turnovers does Jameis Winston have today? pic.twitter.com/BEvWlDqIcV

Jameis trying to hold onto the ball pic.twitter.com/THPsTg8UfG

And if you started Jameis Winston, your roster is inactive#FL1

If you’re a Tampa Bay fan you probably entered Sunday’s game with a positive outlook in terms of Winston based on his last few weeks. While the Bucs had lost two of their last three coming in, Winston had nine touchdowns to his name compared to just two picks.

But that positive mindset left the door after his very first pass on Sunday.

At least the Bucs aren’t boring, I guess?