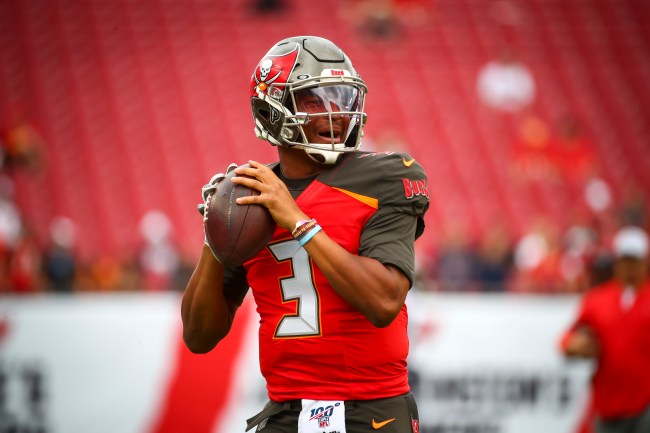 Early Saturday morning there were reports that the Tampa Bay Buccaneers were going to bring back QB Jameis Winston for the 2020 season despite his struggles this year.

Buccaneers slated to bring back QB Jameis Winston for 2020 season. (via @RapSheet) pic.twitter.com/ze6F3CqHNL

The Tampa Bay Buccaneers are expected to bring back quarterback Jameis Winston for the 2020 season, sources say.

But the mechanism they will use to do it remains undecided. Either way, Winston is slated to get tagged in some form.

The former No. 1 overall pick and current face of the franchise, who leads his team into today’s 1 p.m. ET game against the Houston Texans, has guided Tampa to four straight wins and eclipsed 400 yards passing in each of the last two games. The interceptions haven’t gone away, but Winston has hit a groove.

The Bucs might have to rethink their strategy considering Jameis threw two interceptions in the first two minutes in the team’s game vs the Texans on Saturday.

#Bucs QB Jameis Winston throws his 2nd INT in the first 2 minutes of the game pic.twitter.com/82gGMt4IRy

The Internet immediately roasted Jameis over his start.

Jameis Winston really is the football equivalent of Russian Roulette

Jameis Winston is four interceptions shy of a 30 and 30 season. pic.twitter.com/hGeOQaSGU5

Make that SIX interceptions on opening drives for Jameis Winston this season.

If Jameis Winston got points for pick sixes, he'd be the greatest fantasy quarterback of all-time.