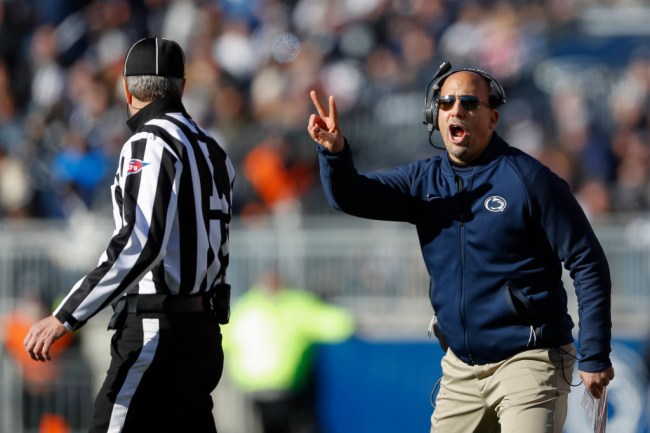 Penn State took down Memphis in the Cotton Bowl on Saturday by the count of 53-39 in a back-and-forth contest. While the two teams combined for almost 1,100 yards of total offense, perhaps the most exciting moment of the afternoon came after the game was over.

Penn State decided to give head coach James Franklin a Gatorade bath as the final seconds ticked off the clock, as teams do, and Franklin decided to turn around and form-tackle one his players to the ground.

I mean, that is one way to celebrate with your team.

James Franklin tackled his player for giving him a Gatorade bath hahahahaha pic.twitter.com/0N9mcN1df1

As you can see, this wasn’t some half-ass tackle where Franklin just wrapped up acting like he was going to tackle his senior linebacker Cam Brown. He was clearly determined to take him to the ground and while it may have taken him a couple of seconds, he took that student-athlete to the turf.

I think most would agree in saying hey, act like you’ve been there before, but whatever floats your boat, sir.

It’s hard to imagine how Franklin would react if Penn State goes on to win a College Football Playoff game during Franklin’s tenure. It will be interesting to see next season if players still have the guts to throw the Gatorade on their head coach after wins.