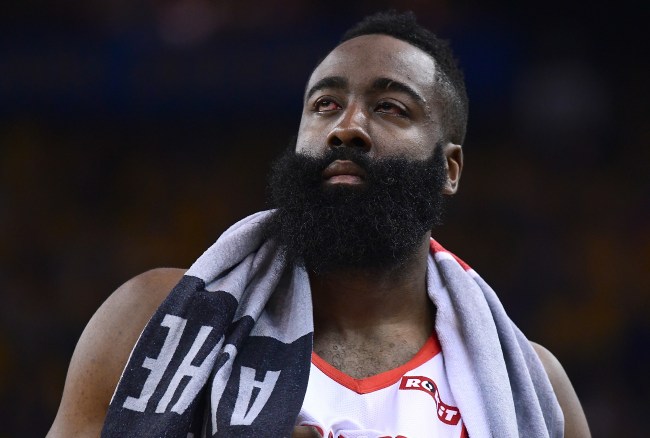 James Harden and the Houston Rockets suffered a 109-115 loss and went down 2-0 in their series against the Golden State Warriors. Harden put up 29-points on the night with 7 rebounds, 4 assists, and a steal but his night was almost entirely derailed after a lacerated left eyelid that left him struggling to see.

James Harden suffered an accidental poke to the eye by Draymond Green in the first period and was left with a laceration on his left eyelid and both eyes were inflamed/red and suffered damage. After the game, Harden told reporters “I can barely see.” Harden was bleeding from his eye but somehow managed to check back into the game in the 2nd quarter and went on to put up nearly 30 points.

Look at this picture of his eyes and tell me this isn’t insane:

When I first saw this picture I thought it was a crude photoshop of the ‘Crying Jordan’ overlaid on James Harden’s face until I realized it was legit. But I wasn’t the only person who assumed this picture was meme-related and after I checked Twitter I realized that everyone on #SportsTwitter couldn’t stop themselves from making jokes at the expense of Harden’s injury.

When the giant picked up Lyanna Mormont pic.twitter.com/3d91moFpef

when the aspca commercial comes on pic.twitter.com/Uf67Vpo6Vv

When she tweet “I’m bored someone text me” but you been texting her pic.twitter.com/oLLLdX7Psn

When she says “Goodnight” but you’re standing behind her at the club pic.twitter.com/ksIsoEiWax

When someone spoils Endgame pic.twitter.com/kqlsDfqNXS

Thanksgiving in a nutshell:

When you come back to family dinner with your cousin from being back in 5 minutes pic.twitter.com/yF2Y47hSBQ

When she puts her ex back in her bio pic.twitter.com/mf2gTukzYX

Me when G-Baby dies pic.twitter.com/MRtiqBmGSr

when the baby finally falls asleep and you kick a rattle on the floor on your way out of her room pic.twitter.com/xoOlLsfoun

When you see the dots pop up twice but she never actually texts you back pic.twitter.com/hbb1pfeDdD

Clean up after yourselves.

when you go to adopt a puppy and she’s already been adopted pic.twitter.com/vYhLcDREZ1

How a lot of you feel all Spring long:

Me when my eyes get red pic.twitter.com/fUeo7LkwW2

Asked about his injury in the post-game interview, Harden had this to say:

“It hurt,” Harden said. “I could barely see. Just try to go out there and do what I can to help my teammates. It’s pretty blurry right now. Hopefully, it gets better day by day. “Can’t see nothing. Barely can see.”

I know they make some pretty badass steroid eye drops for scratched corneas but I don’t know how they go about fixing a lacerated eyelid or what the extent of the injuries on his eyeballs is. Hopefully, this accidental injury doesn’t throw a wrench in the series as the Rockets are already down 2-0 and they’ll need to be playing at 100% to take this 7 games.