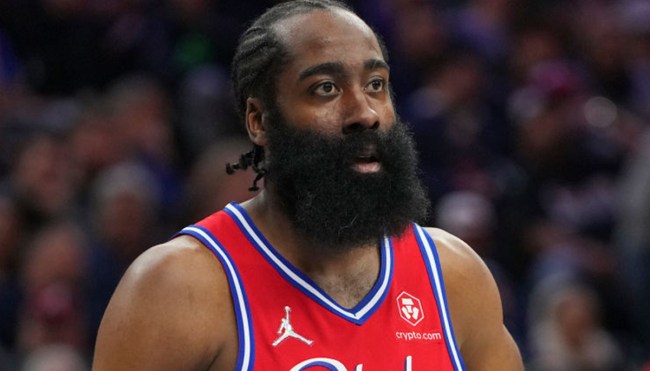 It’s been around a month since James Harden joined the fourth NBA team of his career after he was traded to the 76ers in the blockbuster deal that made Ben Simmons a member of the Nets, and there was an unreal amount of hype surrounding last week’s matchup between the two teams that saw the latter return to Philadelphia for the first time.

Simmons may not have been on the active roster, but fans at Wells Fargo Center came out in droves to shower him with boos in the wake of the dramatic saga he subjected them to over the course of his time with the franchise that drafted him with the first overall pick in 2016.

However, Simmons and the Nets got the last laugh, as Brooklyn pulled out to a 40-23 lead in the first quarter and never looked back en route to a 129-100 romping of his former squad.

Harden only managed to put up 11 points while shooting an absolutely dismal 3-of-17 from the field over the course of the 29 minutes that he played. While the trio of three-pointers he did manage to hit over the course of the contest was largely meaningless in regard to the outcome, the first one he drilled was somewhat significant: it marked the 2,561st trey of his career, which led to Harden passing Reggie Miller for sole possession of third place on the NBA’s all-time list.

On Monday, Harden celebrated that achievement when he posted a highlight video featuring the shot interspersed with his first three-pointer in an NBA uniform along with a couple of other notable ones he’s hit since then.

While Harden neglected to acknowledge the context of the most recent shot, plenty of NBA fans were more than happy to remind him.

i’ve posted fire insta pics from terrible nights too so i get it https://t.co/m6Lx7j151b

this is like Apollo Creed making a highlight video of the time he fought Drago https://t.co/RzXEENLJl5

posting this after nearly losing by 30 points is an incredible bit… im actually all in on this lmaooo https://t.co/FEJ7akBaQn

It’s hard to imagine he didn’t see this coming.