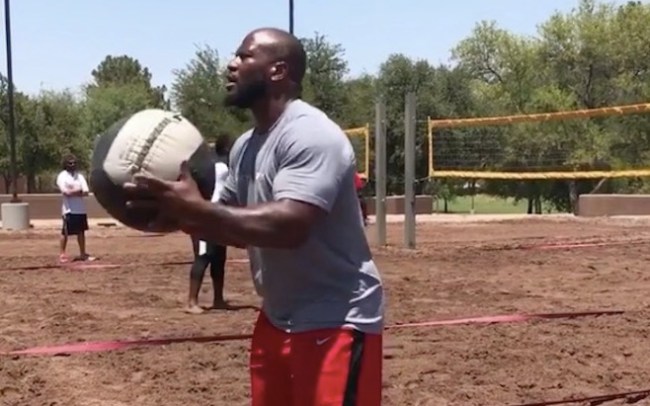 James Harrison is one of the best follows on Instagram for fitness buffs. He works out in ways that mere mortals cannot even begin to comprehend. It wasn’t too long ago that I blogged about him pushing a literal pile of 45-pound plates across the field…plates totaling 1,395-pounds because James Harrison is a total animal.

In today’s episode of ‘how in the actual fuck did 39-year-old James Harrison just do that?’ we get to see the old man playing ‘Danney-Ball’. It’s a game he’s been playing as far back as 2015 (that I know of, he’s probably been playing it for longer). The game is played like volleyball but instead of using a tiny/weightless volleyball he uses a 10-pound medicine ball and it’s absolutely badass:

That was over the weekend. More recently, James has been swinging a sledgehammer at a semi-truck tire and been busting out reverse barbell arm curls because as I’ve said a thousand times before, James Harrison is not a mortal man:

You can hate the Pittsburgh Steelers all you want. I understand sports rivalries as much as anyone on the planet. There was a time (in college) when I wouldn’t even step foot in South Florida because I hate the fucking Miami Hurricanes so damn much (thankfully, that time has passed after years of FSU domination).

So I understand if you hate the Steelers, but you have to be impressed by the myriad of ways James Harrison works out. If you’re bored in the gym this Summer and need to switch up your routine then you 100% need to follow James Harrison on Instagram. He’s out there doing exercises you won’t find anywhere else.