Jared Goff Has The Best Audibles In The NFL: Listen As He Calls Out Tupac, Ric Flair, Elvis And More 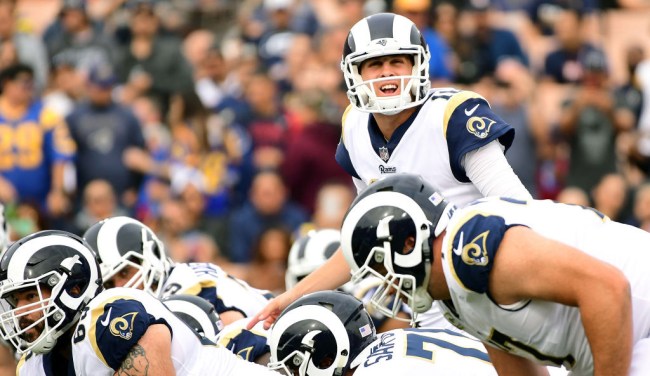 Not only is second-year QB Jared Goff leading the Los Angeles Rams to the type of success they haven’t even sniffed in years, he also has the greatest audible calls in the NFL.

Forget Peyton Manning and his incessant “Omaha” calls. This is the “new” NFL where 23-year-old Jared Goff and his 31-year-old Rams coach Sean McVay break out audible calls we may never get tired of hearing.

Check out the compilation below of some of the excellent the audibles calls they’ve used so far this season, which include “Ric Flair,” “Elvis,” “Tupac” and “Obama.”

(You can also view it here.)

That’s almost as fantastic as the ridiculous turnaround the currently 7-2 Rams have undergone this season since, *cough*, Jeff Fisher took a well-deserved hike.

Yep, the Rams and their QB sure have come a very long way from back when Goff threw a pick in his very first series in the NFL.