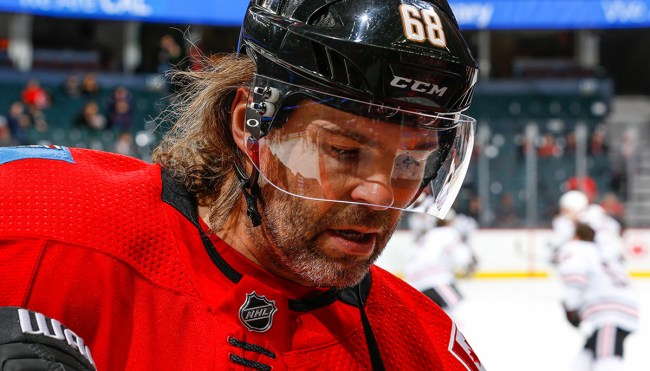 This year’s Stanley Cup Finals marked the end of one of the more interesting streaks in hockey, as the showdown between the Colorado Avalanche and the Tampa Bay Lightning was the first championship series in 42 years that didn’t feature someone who was teammates with Jaromir Jagr at some point during their NHL career.

One of the NHL's most incredible streaks has come to an end.

This year's #StanleyCup Final will be the first time in 40+ years to not feature a teammate of Jaromir Jagr (@68Jagr). 🤯

Jagr was an absolute workhorse who made his NHL debut with the Penguins in 1980 and would play for nine different teams over the course of 24 seasons where he racked up a slew of awards. When he retired in 2018, he did so sporting the second-most points in the history of the league behind some guy named Wayne Gretzky.

There’s no doubt Jagr will be enshrined in the Hockey Hall of Fame at some point in the near future. However, he’s currently ineligible for the ballot because he’s still playing professionally in his native Czech Republic for HC Kladno, the Czech Extraliga franchise that he also owns.

Jagr would still have to post 936 points to tie The Great One’s record, so while that number would be firmly out of reach if he managed to return to the NHL, the 50-year-old forward still took the opportunity to shoot his shot after the league’s free agency period kicked off in a tweet where he announced his services were available for any franchise in search of an “old” and “slow” player with “strong and good hands” who also has no interest in playing any games on the road.

NHL GMs- I am also free agent, once again. 6,3 265 … 50 years old ,slow, but strong and good hands. Can bring experience and like to play only home games. Call me anytime. 😉Also as the owner of hockey club In czech liga -I am looking to sign a Defenseman No jokes

Even if he did come back, Jager would still have a little while to go to become the oldest player to ever lace up his skates in the NHL; Gordie Howe played 80 games with the Hartford Whalers before retiring in 1980 at the age of 52 after 32 seasons as a professional hockey player (which included a six-year stint in the WHA).