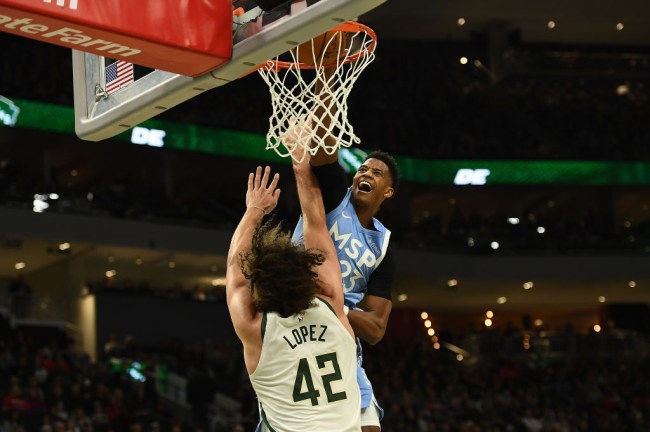 Getting dunked on is easily the most embarrassing situation in all of sports. It’s worse than getting obliterated on the football field, making an awful error on the diamond, getting deked out of your skates on the ice or getting put in a spin cycle on the court.

Robin Lopez helped prove that getting posterized is the toughest of looks on Wednesday night after Jarrett Culver dunked it on his head.

The rookie took it hard to the basket and didn’t care that the 7-foot Lopez was in his way. After throwing it down, Culver stopped and flexed at Lopez before yelling ‘how about that’ at the big man. Lopez didn’t like that all too much and decided to chase him back down the court like an embarrassed child.

Robin Lopez was not happy.

While it’s easier said than done, the best reaction to being dunked on is no reaction at all. Deciding to chase the guy back down the floor because he put you on a poster and flexed a little bit is not the move. If that’s the route you want to take, people are going to write about how bad of a look it is and not only talk about you getting dunked on but how bad you reacted to it.

Culver picked up a technical foul for his celebration after the dunk and even though Lopez chased him down and shoved a Minnesota player out of the way to confront him, he didn’t get slapped with a technical.

Timberwolves head coach Ryan Saunders was asked about the dunk and more specifically the technical foul that was handed out after and he simply said he loved it. I don’t blame him either, it’s always great seeing a fire in guys like Culver showed.

Hey Coach, how do you really feel about @jarrettc08’s dunk over Robin Lopez? 😂 pic.twitter.com/WYKOoNhohz

Lopez and the Bucks went on to win 106-104, but the dunk is all anyone is going to remember from this one.