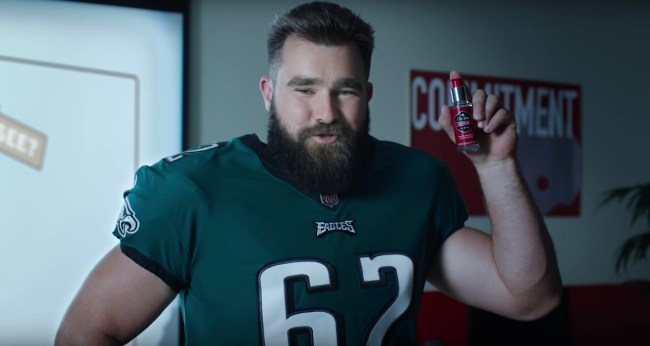 Hi, my name is Brandon Wenerd. I run a lot of our operations here at BroBible. I’m a diehard Philadelphia Eagles fan. I have a grizzly, wolfman-esque beard that’s become a big part of who I am. And, today, I have an embarrassing confession to make.

A couple weeks ago, in Dallas-Fort Worth for a BroBible-related work event, I went to the Dallas Cowboys (…boo!) home opener against the New York Giants (…boo!). I was starving by the time I entered Jerryworld for the game and, in a matter of two minutes, devoured one of the most delicious Texas delicacies I’ve ever had in my a life: The Frito-Pie Cheese Hot Dog. 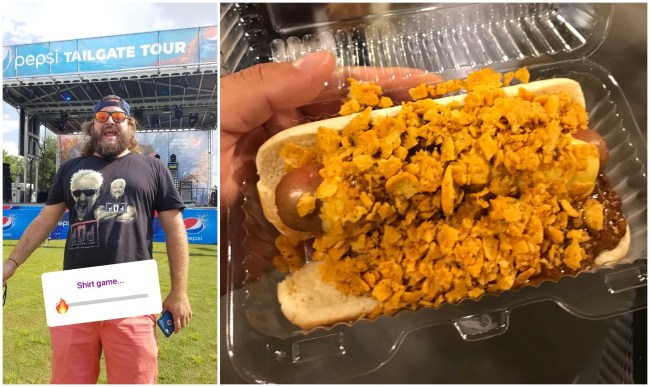 I wolfed it down like a hungry barbarian right by the condiments stand, not thinking for a second about what I must have looked like. Ready to take my seat, I gave my face a couple dabs with a napkin, threw it away, and jumped in a beer line. Once I acquired my beer, started walking through the crowded concourse on the way to my seat behind the end zone.

On the way there, I walked past a dude with a big beard. Honestly, it was one of those majestic beards that’s so well-groomed and conditioned that you’re taken away by it, as a fellow bearded dude. It’s a unicorn beard and, in a moment of pettiness, I was rather jealous that *my* beard was like that after just hitting he barbershop the day before.

The man with the unicorn beard looked at me and started rubbing his beard in the bottom left corner. Being my jolly self, I took it as a gesture of bearded kinship and brotherhood and, said, “yeah man, nice beard you have too!” – Kind of like when motorcyclists pass each other in groups going the opposite direction on a highway and do a below-the-handle-bar wave.

“Hey man… Your beard is a total mess. You have all sorts of food in it.”

I don’t know how many shades of red and purple I turned, but I knew exactly what he meant: Remnants of the Frito-Pie hot dog were ALL throughout my beard. I didn’t even need a mirror to know what I looked like. Even more embarrassing, I waited through an entire beer line looking like a complete slob.

So I thanked him and instantly U-turned towards the nearest men’s room to clean up, good and proper.

What I’m trying to say from that story is this: There’s a fraternal order amongst us fellow beardsmen when it comes to our grooming routines. We’re pretty whacky and obsessive about keeping our whiskers clean and well-kempt, as a badge of genetic, testosterone-filled pride. So we talk incessantly with our bearded brothers about what constitutes top-notch beard care.

From those conversations with our bearded pals, we’re consistently learning and applying new things to our beard care regimens so we don’t end up looking like Albert G. Jenkins, owner of the flat-out nastiest beard in the Civil War. Taking care of a beard is dramatically different from other male grooming routines – You’re constantly tweaking tiny details to keep it healthy and well-sculpted, like a garden.

No matter what paths we walk in life, us bearded dudes just… get it, with each other. Every single one of us knows the struggles that come with beard life (ie: eating chicken wings) and maintenance it takes to keep our beards on par with Grizzly Adams.

As an Eagles fan, I jumped at the opportunity. Kelce is a firmly on a Mt. Rushmore of bearded NFL greats past *and* present, right up there with Jared Allen, Brett Keisel, Matt Patricia, and Ryan Fitzpatrick. Beards? Kelce? A chance to talk HIS ABILITY TO JAM ON THE BARITONE SAX… LFG. I’ve probably watched the Eagles offensive lineman’s underdog speech in his ridiculous Mummers uniform a million times after the Super Bowl parade. I still get chills *just thinking about it* – He deserves place in the hallowed halls of Canton just for barking that thing out on a chilly February day on the Art Museum steps.

Best of all, Kelce joined me on Skype between talking with Dan Patrick and Eric , where we could gloat about the epicness of our beards in the ways that bearded dudes do at a brewery or a barber shop.

Here’s a few things you need to know about Jason Kelce’s incredible beard and how he takes care of it. Listen up, bearded Bros. Beardtober and No Shave November are coming and you better take notes from the Jedi master himself.

A few quick notes in summary from the first episode of BEARD TALK – a new thing here on BroBible that I’m now making a thing.

-He’s been going to the same barber in Old City Philadelphia, Libby, to clean up his beard through out the course of his NFL career. She’s consistently good at her job! Pays to keep going back to the ones who take care of keeping your face in check. It’s $40 a trim.

-He’s been growing his beard six or seven years ago and “just kinda let it go,” along with his gnarly flow at the time. Then Libby told him he needed some maintenance to get everything under control.

-She gave him beard oils to try.

-His wife, meanwhile, noticed that he was getting acne like crazy under his beard and insisted that he had to “start cleaning this… You can’t just let this thing fester like this.”

-On the dreaded beard itch: “There’s a phase when people start growing beards where they don’t know what their doing to take care of it. But you grow out of it when you learn how to tame it.”

-Kelce dreads eating Mexican street corn (elote) because of the cheese and butter and corn kernels. It gets everywhere on a beard and is quite impossible to clean in a respectable manner.

-On why he got the good beard genes in the Kelce family… “It’s just God’s way of keepin’ it fair. He gave Travis all the athleticism, height, and good looks… I’ve got to give this guy *something*…”

-Travis would currently beat Jason Kelce at thumbwrestling… “The dexterity just isn’t what it used to be.”

Watch the conversation below.