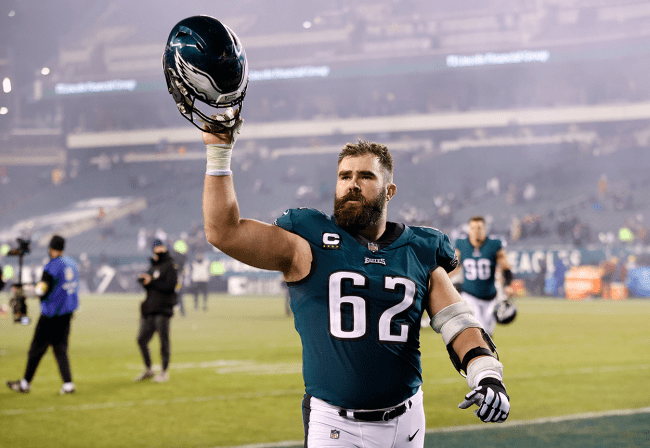 34-year-old Jason Kelce is entering his 12th year in the NFL, all of which have been with the Philadelphia Eagles. As the four-time first-team All-Pro and Super Bowl champion center approaches his final years in the league, the team that drafted him in 2011 decided to draft his replacement in 2022.

As it would turn out, Kelce had a big role in the process and his classy reaction to the pick is why he is the absolute best.

During the second round on Friday night, Philadelphia drafted Cam Jurgens. Jurgens, a 6-foot-3, 291-pound lineman out of Nebraska went 51st overall.

With the 51st pick in the 2022 #NFLDraft, the Philadelphia Eagles select C Cam Jurgens.@LifeBrand_AI | #FlyEaglesFly pic.twitter.com/m9XyNgD4m3

Ultimately, by taking Jurgens, the plan is for the rookie to develop and learn behind Kelce and eventually take his spot. Kelce knows that.

In fact, over the course of the last few months, the Eagles asked their veteran center to be a part of the process. They had Kelce watch tape on some of the prospects in this year’s draft and Kelce did so happily.

After watching film, Kelce fell in love with Jurgens and told the front office who he would pick, and Philadelphia did exactly that. As Jurgens heard his name called, Kelce was simultaneously live on a coinciding broadcast.

While most people might be upset when their team drafts their replacement, Kelce was thrilled.

talk about being UNSELFISH

talk about being a TEAM PLAYER

he loved C Cam Jurgens most

Talk about a class act!