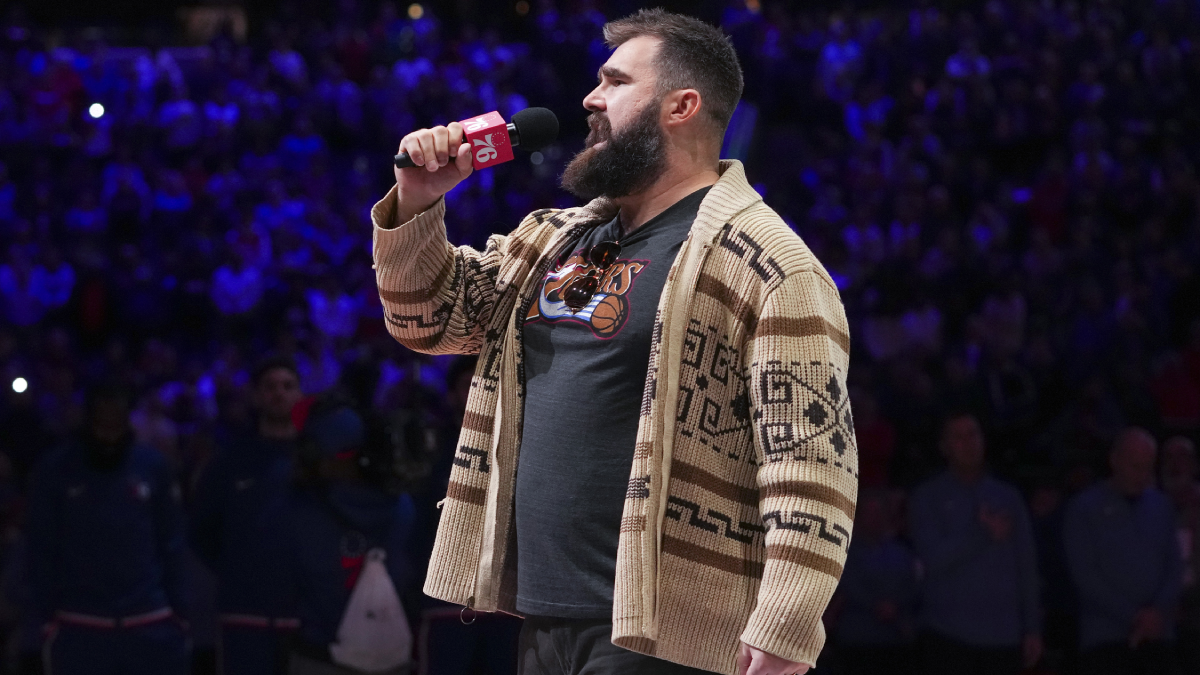 Jason Kelce is a busy man these days. He is currently responsible for the hardest holiday gift to find this year with A Philly Special Christmas.

Kelce is juggling his new Christmas album fame with playing for the Philadelphia Eagles who are Super Bowl contenders. And on top of everything, Jason Kelce is now in a budding bromance with Lord of the Rings and 50 First Dates actor Sean Astin.

Jason Kelce recently recreated Sean Astin’s iconic outfit from Adam Sandler’s 50 First Dates. That movie, ironically, remains one of the most rewatchable Rom-Coms Adam Sandler has ever made. And I’ll just assume that everyone out there remembers Sean Astin’s ridiculous outfit while playing Drew Berrymore’s roided-up brother in Hawaii.

Sean Astin saw Kelce’s outfit, loved it, and the two engaged in a back-and-forth on Twitter about how much they love one another. Everyone following on social media was able to witness the bromance come together in real-time. Here’s the story in 4 tweets:

Who did it better: @JasonKelce or Doug Whitmore from "50 First Dates"? 😂

No way!! I’ve been a huge fan for a long time Sean! Rudy was my Dad’s favorite sports movie and we watched it many times growing up, I was a walk on linebacker in college, and it meant even more during that. Nobody could possibly wear that outfit better than Doug himself! https://t.co/5a5CfRCu5q

If that tweet isn’t loading, Jason Kelce told Sean Astin “No way!! I’ve been a huge fan for a long time Sean! Rudy was my Dad’s favorite sports movie and we watched it many times growing up, I was a walk on linebacker in college, and it meant even more during that. Nobody could possibly wear that outfit better than Doug himself!”

Who wore it better: Sean Astin or Jason Kelce?

The NFL asks who wore it better. Sean Astin, the original wearer, sends props to Jason Kelce. Naturally, Kelce threw it right back at Sean Astin and then took that opportunity to praise Astin’s acting career. Fans in the Twitter mentions seem split on who wore it best.

If you need a refresher on ‘Doug’ from 50 First Dates, here you go:

With all of the talk about how Twitter is going under because there aren’t enough existing employees left to keep the tech working and lights on, this is a prime example of what many will miss about Twitter. Two complete strangers can come together in the comments and become friends. Or they can become enemies 99% of the time because there’s always someone pissed off about tweets that have nothing to do with them.

Sean Astin is a California kid. He was born and raised in Santa Monica and went to UCLA for undergrad. There are no indications that he’s a Philadelphia Eagles fan but it would be awesome if there was a connection that brought these bros together in real-life.

Elsewhere in the NFL, Jason Kelce recently had strong words for Tom Brady. There was viral footage of Tampa Bay quarterback Tom Brady chewing out his offensive line. Kelce responded to the footage by saying he’d put Brady ‘in that trash can’ if he didn’t ‘shut the f up.

TB12 gets a pass, but no other QBs better try to yell at @JasonKelce 💀 pic.twitter.com/vSloeD0zXR

Imagine a world where an offensive lineman actually picked up Tom Brady and put him in a trash can. The entire NFL world would meltdown in an instant. It would be incredible to witness.

As for Sean Astin, he’s recently appeared as ‘Sunny Gryce’ in Perry Mason and has 9 projects currently in post-production. Those projects include The Invisible Raptor where Sean Astin will play an ‘amusement park paleontologist’ fighting an ‘invisible raptor’ tearing up the small town. Astin will also appear in the animated Man & Witch with Christopher Lloyd that’s being described as an ‘homage to the lo-fi fantasy films of the 80s and a comic adventure.’