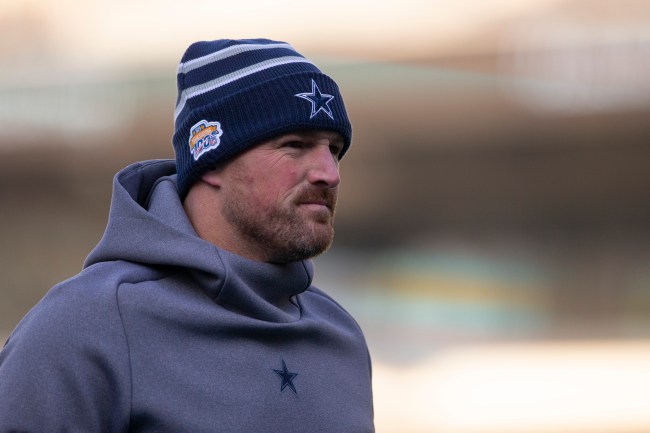 The Dallas Cowboys ended their disappointing regular season on Sunday when they were officially eliminated from the playoffs after the Eagles beat the Giants to win the NFC East title.

According to several reports, the Cowboys will part ways with Jason Garrett once his contract expires.

A team source tells me HC Jason Garrett’s contract expires on January 14th so it is possible that we may not hear any word until then. It would not be a firing it would simply be a decision to not renew #Cowboys

The Cowboys are expected to inform Jason Garrett today that he will not get a new contract, ending his 9.5-year tenure with the club, a source tells @1033fmESPN

There are several big names being considered to replace Garrett but the most surprising name to pop up as a potential candidate for the Cowboys head coach job is Jason Witten.

On Monday morning’s edition of ESPN’s ‘Get Up’, NFL insider Dan Graziano proposed that Witten becoming the head coach of the Dallas Cowboys is unlikely but definitely a “possibility”.

A lot of different ways this can go for the Cowboys, you hear the name Urban Meyer as someone who is of interest to them, Lincoln Riley, You hear if the Vikings were to get eliminated, they make a play for a guy like Mike Zimmer, who has a history there in Dallas. And you also hear the possibility of however remote that may be they would give the job to Jason Witten. It’s unlikely, but it’s not completely off the table.”

Witten would definitely big an unusual choice but he’s been loyal to the team and is very close to Jerry Jones so it’s not completely out of left field.