Jason Witten Is Open To Returning To The Broadcast Booth After Brief ‘Monday Night Football’ Stint, Gives Advice To Young Players On How To Deal With Social Media Criticism 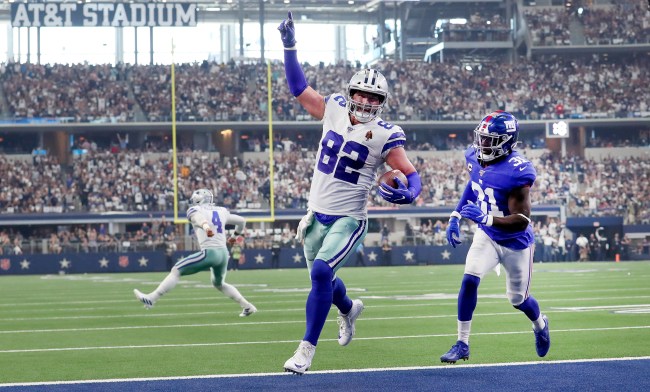 At the end of the 2017 season, longtime Dallas Cowboys tight end Jason Witten made the decision to retire from professional football, after being given the opportunity to join the booth on ESPN’s Monday Night Football broadcast.

During the 2018 season, Witten was front and center on ESPN during the league’s biggest football broadcasts but after only one season he apparently missed playing football so much that he came out of retirement for another stint with the Cowboys.

Witten’s return to football happened this weekend and while he saw limited action on Sunday he was able to catch a touchdown pass during the game.

We were able to catch up with Jason to talk about his NFL return, on if he’s open to working in broadcasting again, what advice he has for players to deal with social media criticism and his work with Courtyard By Marriott’s Super Bowl sleepover contest that will allow one person and three friends the chance to win a unique trip to the Super Bowl.

.@CourtyardHotels is celebrating game-changing friendships by awarding 1 winner + 3 friends a #SBLIV Sleepover inside the stadium. My entry would be a story about my pal @emmittsmith22, a leader, game-changer, & legend #CourtyardSuperBowlContest Rules: https://t.co/fTGfo9MZJa #ad pic.twitter.com/L1M4abcpeC

Hey, what’s up Jason, how did it feel to come back and get a touchdown and a win in your first game back from retirement?

“It was a great plan and you know when you see the plan executed that way I think he deserves a lot of credit with how he called the game and he called it well. He came out in the second half the first play you know the 40 yard pass to Amari Cooper and that’s just you know you want to tackle it’s another thing when you have that type of success so you just kept doing it and Dak was really comfortable with running that offense
”

How has Dak Prescott grown since you last played with him in 2017?

“I just think he’s comfortable you know he’s seen all the different defenses of the different blitzes and different coverages and so he’s comfortable running the offense being Q. B. 1 and being a great leader I mean he’s a phenomenal leader and how he approaches the game and to see him have that success in week 1 I don’t think it’ was a surprise to any of us because of the way prepares the way he’s approached all season I think he’ll continue to build off that”

When did you know that you wanted to come back to play football while you were at ESPN?

“You know I always had the feeling that I missed it there’s something always kind of tugging on me but I knew that you know that’s part of the transition… I didn’t know until after the Monday Night Football season was over so I think it was like a week after the Pro Bowl, well I kind of took time and was able to push myself to see if I can you know I could do it because I knew I’d have high expectations for myself and once that happened I always go in and so was just so fortunate to have this opportunity you know a lot of hard work to get there and you know we’ll see we’ll see how it finished up”

Are you stilling to give broadcasting another shot once your football career is over?

“Yeah I think I’m gonna keep that window open you know I definitely think I learned a lot through that experience I think I got a lot better and improved and you know I enjoyed my time in broadcasting yeah I would never say ever know never on that you know. I will definitely be open to it. ”

You’ve dealt with plenty of social media noise throughout the past year what kind of advice do you have for players to deal with criticism from fans on Twitter?

“I think the biggest thing is just have your expectations and your standard for yourself has to be higher than what everybody else can put on you and if you have that approach then none of that other stuff allow well affect you.. I think it’s a different age and everybody’s got an opinion and they can voice that opinion into a lot of different avenues and platforms, so you have to be able to kind of not allow that to affect you either A. don’t read it or B. don’t allow it to a factor or have an impact on who you are or how you go about something or your confidence in and I think that’s easier said than done but I think the best ones have that mental clarity to be able to kind of block those things out and it’s going to keep up with it that’s one thing but if you can allow it to affect you then you know you’re gonna allow that distraction to creep in and I just don’t think it’s wise to do that”

Alright, so you’re working with Courtyard By Marriott- the Official Hotel of the NFL- on this Super Bowl Sleepover contest that is celebrating “game-changing friendships” can you tell us about that?

“It’s a pretty cool contest they’re having where you can invite three other friends and for a game-changing friendship, just share a photo and share a short story using the #CourtyardSuperBowlContest on social media and they can win an opportunity to stay the night in a hotel room inside the Super Bowl stadium in Miami, I think for those fans to be able to enter that and have their friends join them there at the Super Bowl, It would be an unbelievable experience for them

Hall-of Fame running back Emmitt Smith, who is working with Marriott Bonvoy, hosting Masterclasses among many NFL Moments where members can redeem their points, is a close friend. Can you talk about your own ‘game-changing friendship” with Emmitt?

This year, Courtyard by Marriott, the official hotel of the NFL, is celebrating the game-changing friendship of one NFL fan along with a group of three friends who have encouraged each other to follow their passions. The winner will enjoy an overnight stay inside a stadium suite transformed into a Courtyard guest room with a view overlooking the field. Fans can enter with a photo and short story via social media using #CourtyardSuperBowlContest in posts showing and describing their game-changing friendship.

Together with the NFL, Marriott Bonvoy is offering over 155 Moments throughout the 2019-2020 regular season, including Masterclasses with former NFL players like Emmitt Smith. These ultra-exclusive experiences are only available to members on the Marriott Bonvoy Moments platform and can only be accessed by redeeming Marriott Bonvoy points.

Want to sleepover inside the stadium the night before #SBLIV? 🏈 To enter, share a picture + short story that shows off your game-changing friendship with the hashtag #CourtyardSuperBowlContest.