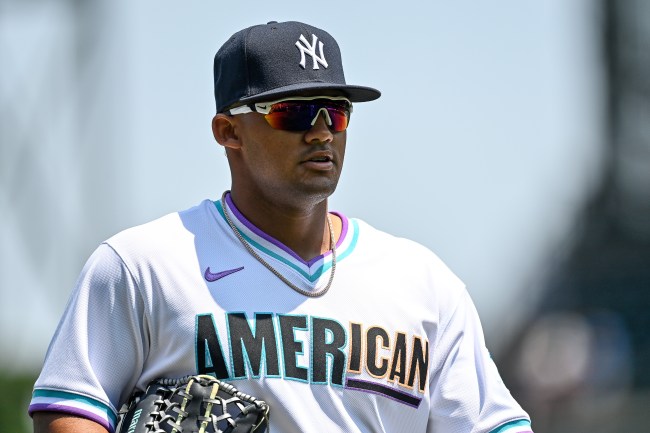 New York Yankees mega-prospect Jasson Dominguez was seen crushing the baseball at the Yankees minor league camp in Tampa earlier today. The 19-year old switch-hitting outfielder has barely played in the minors, yet he’s been one of the game’s most hyped prospects since signing with the Yankees at the age of 16.

Dominguez has been quoted by baseball officials as resembling Mike Trout, and even Micky Mantle. His nickname is “The Martian” thanks to his unreal athletic abilities.

Why Minor League Camps Are Happening in Baseball Right Now

It’s true the MLB lockout still has no end in sight, but there’s still professional baseball happening at the minor league level—specifically with the start of minor league minicamps. These minicamps give young players a chance to experience what it will be like when they someday report to MLB spring training.

Simply put, Dominguez was putting on a show for reporters at the Yankees developmental complex in Tampa today.

Here’s another view of that batter’s eye moonshot.

Jasson Dominguez hits one off the batter’s eye, above the top of where the fence would be, during live BP. #Yankees pic.twitter.com/XYsfXfayCi

And here are some more photos Yankees reporter Bryan Hoch was able to get.

Dominguez has also been putting in heavy work learning English—something many fans forget about when players outside the U.S. start playing professionally. Shohei Ohtani is another star we’re seeing learn English in real-time.

After workouts, Dominguez did what was likely his first full-English interview. Dominguez’s translator stood next to him and relayed the questions in Spanish, to which Dominguez then answered aloud in English.

This is truly awesome:

Yankees 19 yr old prospect, Jasson Dominguez, does an entire interview in English and you can see how proud both he and his translator are.

Behind the scenes, Latino players have English class almost every day. So cool to see this pic.twitter.com/r4lSewojHx

What’s awesome is you can see the excitement on his face after accomplishing the interview. It’s a great feel-good moment for viewers—especially for those who have experienced learning a new language.

One of the Yankees’ other top prospects, shortstop Anthony Volpe, is attending the minicamp. According to one reporter, Volpe said he and his teammates are calling Dominguez “mini Aaron Donald.”

It’s looking like the future is bright for the Yankees’ best prospects.

Hopefully the MLB and the MLBPA will have a deal done soon so guys like these can get a chance at big league time.