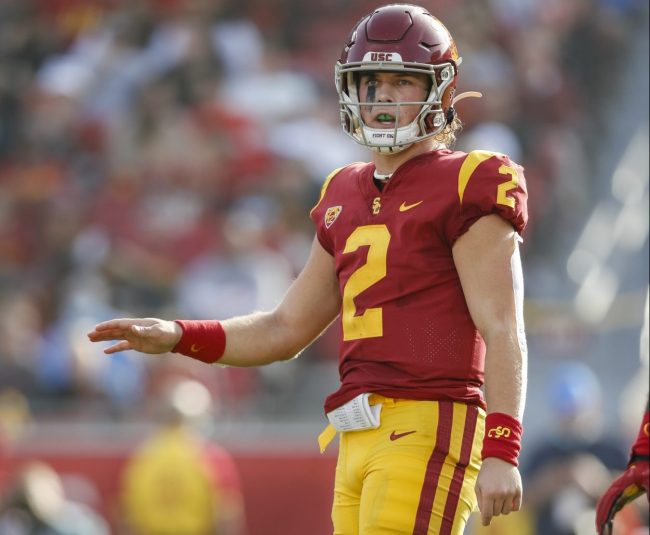 Ole Miss football has landed its quarterback of the future in former USC starter Jaxson Dart. After a long, back-and-forth recruiting cycle, the Utah-native is headed to Oxford to suit up for the Rebels in 2022 and beyond.

His on-field talent speaks for itself and he named the Gatorade National Player of the Year as a senior in high school. However, Dart’s pick-up line game could, apparently, use some work.

Early in 2021, USC backup quarterback Mo Hasan started the ‘MOmentum Truck Podcast’ out of the back of a moving truck. He was the first to start an active college football podcast, meaning that he is still playing while hosting, and has on a different guest every week.

Toward the end of 2021, Hasan brought in Alexandra Stewart, of Love Island fame. During one segment, he read off some pick-up lines that were submitted by his teammates.

Among them was Dart’s alphabet-based submission:

“You remind me of the 21 letters in the alphabet.”

But aren’t there 26 letters in the alphabet?

Despite the creativity, it did not land. Here was the reaction to Dart’s line:

Rate Jaxson Dart’s pick up line and like for part 2! #fyp #loveisland #pickupline

Dart has been in a committed relationship for some time, so perhaps his game is a little bit rusty. Maybe it was the wrong audience.

Regardless of the reason — it was claimed to be too cheesy — it fell flat.

Some of the other ones hit a little bit better, take a look: