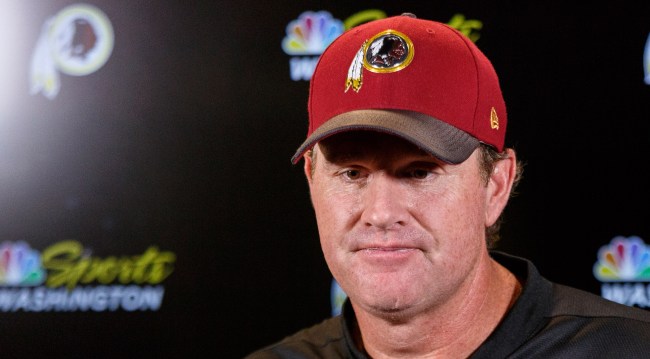 After compiling a semi-impressive 87-57 record over nine seasons coaching in the Arena Football League and one in the United Football League, Jay Gruden finally got the call to become the head coach of the Washington D.C. NFL team in 2014.

Things started out a little rough, as would be expected for a first time NFL head coach, as Washington went 4-12 in year one of the Jay Gruden era.

In year two, however, Gruden and Washington seemed to have turned the corner, finishing 9-7 and winning the NFC East.

Unfortunately for both parties, that was the high water mark as the team has since racked up three straight third place finishes in the East, going a combined 22-25-1.

All of which might explain why Gruden looked like someone murdered his puppy in the annual coaches’ photo at the NFL’s league meeting in Phoenix.

Wow. The Hoodie actually showed up!

Now let’s zoom in on Gruden.

Jay Gruden on the far right looks like he is about to lose his lunch...

Jay Gruden looks like he wishes he was anywhere but there.

Not sure what but something is going on with Jay Gruden...

Jay Gruden got that “Case Keenum’s my current starter” look on his face pic.twitter.com/aidnYS7GaD

I think this is probably a more logical explanation…

Jay Gruden has reportedly been left in the dark on all of the Redskins' free agency decisions. https://t.co/oX63Q7SVja pic.twitter.com/RVSkrv7fLL

Meanwhile, as you zoom in on Gruden in the photo, just keep on zooming because if you do you’ll notice a woman in the background photobombing the whole session, and it looks like she might be up to no good.

What exactly is she doing with her top? Asking for a friend.