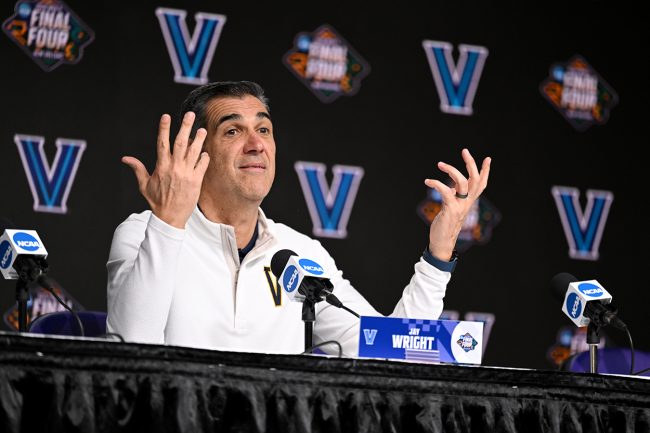 When Villanova head basketball coach Jay Wright announced his retirement last week, it came as a shock to many. However, the 60-year-old had just come off of a Final Four appearance and decided that he had accomplished everything that he had set out to accomplish.

Rather that celebrating Wright’s greatness and understanding that it was simply time for him to step away and focus on the next chapter of life, speculation ran rampant.

WILL JAY WRIGHT TAKE A COACHING JOB IN THE NBA?! IS HE STEPPING DOWN TO MAKE HIMSELF AVAILABLE FOR THE NEXT LEVEL?

The answer to both questions, as of right now, is no.

Wright spoke with ESPN’s Keyshawn, J-Will & Max radio show on Tuesday morning and said that he is not interested in the NBA. He didn’t rule out an NBA job in the future, but made it very clear that it is not in the cards for the foreseeable future.

In addition, Wright explained why. He has already scratched that itch, kind of.

“Not right now,” he said. “That was something I always thought about. My experience with the Olympics kind of scratched that itch. It gave me so much experience with those guys last summer with Coach [Gregg Popovich] and Steve Kerr and Ime Udoka and all those guys and Kevin Durant. We were together, we did that some years before that with the World Cup. That was so awesome. I kind of feel like I did it a little bit and I loved coaching those guys.

“Right now, I definitely need a break. Right now, I’m looking forward to this position at Villanova. But honestly, down the road, I don’t know what I’m going to feel like. I know I made the right decision because I don’t think going into next year, I’d be able to do the things I’d need to do to keep this program at a high level. But I’m going to take this year and really throw myself into this position at Villanova and see what’s out there.”

Jay Wright isn’t planning to coach in the NBA, but left the door open to the possibility of coming out of retirement. #KJM pic.twitter.com/urXEhTmjFK

The role that Wright is speaking about keeps him at Villanova. He is transitioning to the title of “special assistant to the president” and will help with fund raising, advising and education. If the NBA comes calling, it sounds like Jay Wright is comfortable where he is.