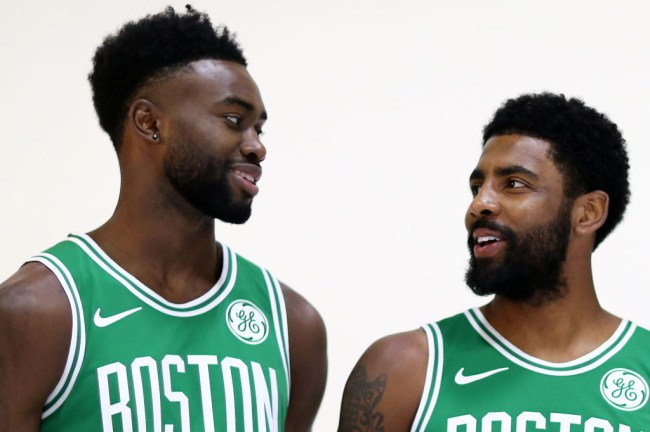 The Celtics season has resembled an O.J. Simpson polygraph test, with peaks followed by immediate troughs. The C’s, who finished second in the East last season and were one game away from the NBA Finals without All-Star vets Kyrie Irving and Gordon Hayward, currently sit fifth in the Eastern Conference and post a ‘meh’ record of 25-18.

Undoubtedly the worst loss of the season came at the hands of the Orlando Magic on Saturday, when the C’s blew a lead to lose 105-103. The loss came just days after  Marcus Morris pushed teammate Jaylen Brown in the huddle, and the Orlando game was an opportunity for the Celtics to prove there is no trouble in Paradise.

That’s not how it worked out. Kyrie Irving adamantly disagreed with the play call coaching guru Brad Stevens drew up with 3 seconds left in the game.

Another look at Kyrie in the huddle before Celtics' last shot.

After Tatum missed a less0than-deal fade away on the baseline to lose the game, Irving extended his hands and called out Gordon Hayward for not executing the play.

Kyrie Irving was visibly upset with Gordon Hayward following a bad loss to the Magic. pic.twitter.com/crR3XADR3v

After the game, Kyrie laid blame to the ‘young guys’ who don’t know what it takes to be a championship ball club.

“The young guys don’t know what it takes to be a championship level team. What it takes every day. And if they think it is hard now, what do they think it will be like when we’re trying to get to the Finals?” Irving said. “There were no expectations last year. Everyone played free and easy. Everyone surpassed whatever they expected for themselves. This year? We all have high expectations. The players, the coaches, everyone. And that’s good, but we aren’t doing it yet. We can get there. We’ve got to be better. I’ve got to be better. We need to win these games on the road. That’s on me as a leader. I need to be a better leader and to help get us there.”

22-year-old Jaylen Brown is one of those young guys, and appeared to take exception to Irving’s comments.

Jaylen Brown to reporters in New York: “It’s not the young guys’ or old guys’ fault — it’s everybody.”

More: “We just have to have each other’s back at the end of the day. We can’t make comments, we can’t point fingers.”

Kyrie Irving has pointed at the young guys all season.

However, 20-year-old Jayson Tatum, also a young guy, did not take the comments to heart.

The internal drama is surprising for a team that was so polished last season and groomed by Brad Stevens. But with the C’s struggling, the ‘young guys’ must be thinking the return of Irving and Hayward has only been a detriment. Especially when Kyrie is putting them on blast. It’s going to be interesting to see how this year plays out.