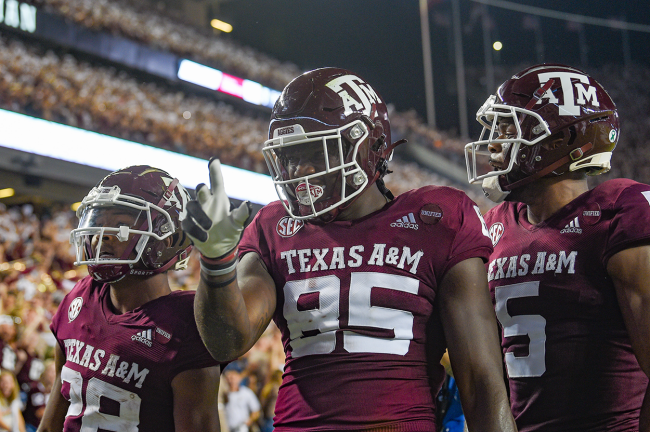 Texas A&M football is absolutely tearing it up on the recruiting trail. After landing the best recruiting class of all-time, the Aggies have four four-star recruits committed for 2023 and are ranked in the Top-10 already.

Jimbo Fisher continues to try and spin a false narrative about the role that NIL is playing in A&M’s recruiting success, but whatever they are doing (wink wink) is working. The Aggies landed a commitment from four-star cornerback Jayvon Thomas on Wednesday.

To announce his commitment, Thomas used one of the greatest graphics of all-time. It made no sense and it leaves a lot more questions than answers.

Now, Thomas is from Dallas, Texas. Neither the fish nor the shark makes much sense.

Dallas is not a hot spot for deep-water ocean fishing and neither is College Station. Both cities are landlocked.

It appears as though both the fish/shark and the chainsaw were part of a recruiting shoot while on campus at A&M. Perhaps, in fact — most likely, it alludes to the fact that the Aggies “landed a big fish” in recruiting, which is a common phrase in the space.

Nevertheless, neither the fishing haul photo nor the chainsaw has anything to do with the Aggies. It’s incredible.