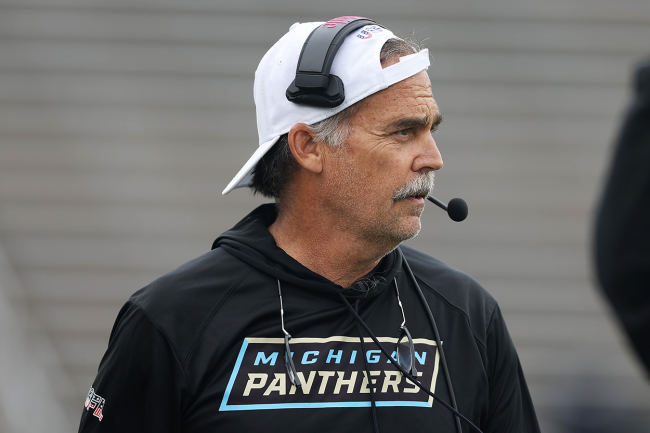 Jeff Fisher is back in football and the world is better for it. At 64 years old, the 22-year NFL head coach made his debut as the head coach of the USFL’s Michigan Panthers on Sunday and his outfit garnered quite a bit of attention.

Fisher, who also serves as the general manager, did not get off to a hot start. After drafting Shea Patterson No. 1 overall in the USFL Draft, Patterson completely embarrassed himself and allowed his opponents to score their first touchdown of the season.

As a result of Patterson’s blunder and simply being out-played by the opposition, the Panthers fell behind 17-0 at halftime. Fortunately, Fisher was there to give his team a pump-up speech as they tried to get back on track.

Prior to the end of the second quarter, Fisher turned quite a few heads by taking to the sideline with a backwards hat. In turn, football fans far and wide took to Twitter to crack some jokes about the man who owns a .512 all-time winning percentage.

The obvious joke was about how Fisher was trying to fit in.

How do you do fellow kids? https://t.co/xEQsIco5gh

The other joke that was on the tip of everyone’s tongue had to do with Colin Cowherd’s stance on backwards hats.

The Colin takes are gonna be wild….😂

From there, it was a field day.

(Record scratch) You’re probably wondering how I got here. https://t.co/VDn4ElvvcK

Fisher out here looking like Josh Brolin in public 😂 https://t.co/fVXoY6Ccph

You know that team is going 7-9 https://t.co/Mydtm1Vgmh

The brim of his hat is pointing at somewhere between 7-9 o’clock. https://t.co/PkAm8xc0qU

Win, lose or otherwise, we are lucky to have Jeff Fisher back in our lives.