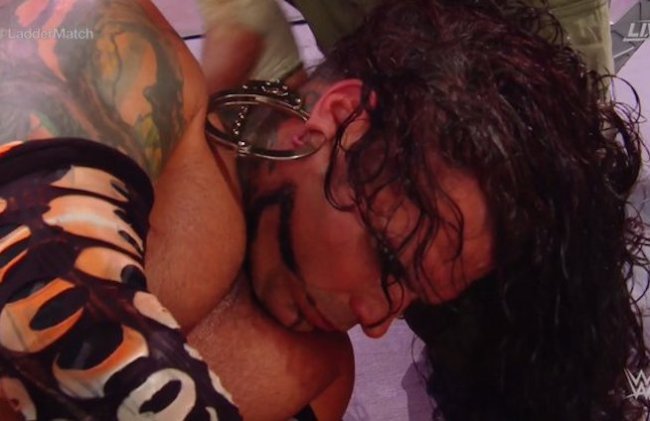 Sami Zayn, AJ Styles, and Jeff Hardy managed to steal the show at WWE Clash of Champions before the show really even began.

Sami Zayn grabbed both his and Jeff Hardy’s title belts from above the ring to be named the undisputed champion after handcuffing AJ Styles to the bottom of the ladder and handcuffing Jeff Hardy to a ladder THROUGH his earlobe.

Sami Zayn handcuffed Jeff Hardy to a ladder by his earlobe, wtf. 😂

Hardy spent the rest of the match carrying the ladder around.

Oddly enough, this is not the first time the WWE has screwed with Jeff’s ears during a match.

Prior to the earlobe spot, Hardy did a Swanton bomb through Sami Zayn and through a ladder.

Michael Cole yelling “Jeff, get down from there!” nearly murdered me.