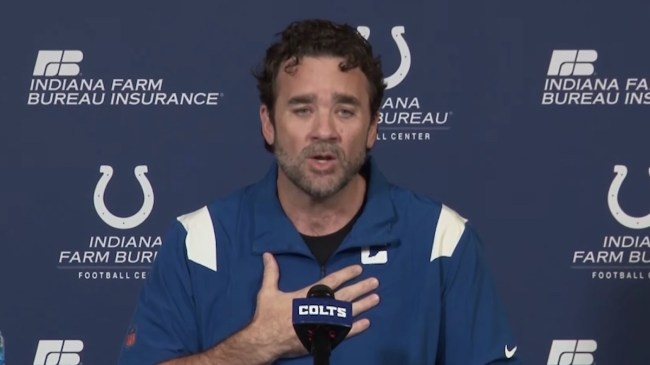 While the Indianapolis Colts and owner Jim Irsay have largely been criticized for hiring former Pro Bowl center Jeff Saturday as their interim head coach, Jeff Saturday himself has been receiving virtually widespread support from fans, analysts, and players alike.

If social media is any indication, football fans are certainly going to be rooting for Saturday to succeed as the 47-year-old’s recent impassioned defense of his qualifications has people believing that he could make it as an NFL head coach. Saturday, of course, was most recently working at ESPN as an NFL analyst and has no previous head coaching experience at the collegiate or professional level.

One thing that the NFL world certainly seems to agree on is that while Saturday’s strategy skills may be up for debate, his motivational skills certainly are not.

Listen… I’m no member of the @Colts, but I would absolutely run through a brick wall for Coach @SaturdayJeff after hearing this speech. We’re in for a trip, boys and girls. https://t.co/SwfISiGS56

I have no idea how this little experiment is going to turn out – most likely with several more losses…
But I freaking love this dude.
I would play for him. #ForTheShoe https://t.co/mDm3DWKu64

Yeah I would play for this guy. Really hopes he shuts people up https://t.co/dkgtyriPxn

But don’t sit here and tell me this attitude from Jeff Saturday isn’t awesome https://t.co/8T5QFoy0Fw

He finna go off as HC https://t.co/BynF9exuGa

Honestly…I’m ready to run threw a wall for this man after that https://t.co/tV5O02avBK

What if he's awesome? https://t.co/AlvXFpkQNI

Its hard not to root for this guy https://t.co/EdWEWHVXmL

Saturday, who played for the Colts from 1999 to 2011 — and won the 2006 Super Bowl with the team — was hired as the team’s interim head coach on Monday following the firing of Frank Reich, who had been in the role since 2018. In addition to his Pro Bowl and All-Pro career with the Colts, Saturday also spent a season with the Green Bay Packers in 2012 before his retirement.

The Colts’ first game under Saturday’s leadership will come on Sunday when they travel to Las Vegas to take on the Raiders — a team that he tweeted “look horrible” when he was working for ESPN just a few weeks ago.

As things stand, Saturday will coach the 3-5-1 Colts — who are two games behind the first-place Tennessee Titans in the AFC South — for their final eight games this season, with owner Jim Irsay already indicating he could be hired full-time if the experiment succeeds.

You can check out Saturday’s first full media availability as the Colts’ head coach below:

RELATED: Indianapolis Colts Owner Jim Irsay Gets Heated When Asked If The Team Is Tanking