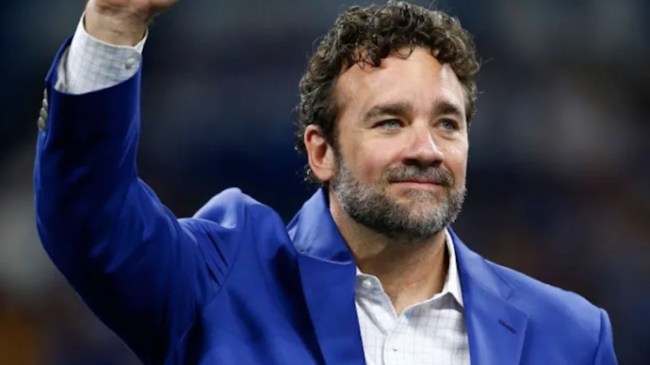 On Monday, November 7 — following a Week 9 loss to the New England Patriots that saw their record drop to 3-5-1 — the Indianapolis Colts fired Frank Reich, who had been the team’s head coach since 2018.

After they announced the firing of Reich, news then broke that the Colts were going to hire former Pro Bowl center and current ESPN analyst Jeff Saturday as their interim head coach for the rest of the 2022 season.

The decision to hire Saturday as their head coach is a historically outside-the-box move as the 47-year-old has become the first person in NFL history to be named a head coach without any coaching experience at either the NFL or college level.

Just to further hammer home how unique it is that Saturday, who was on TV analyzing the NFL for ESPN just last week, is now the team’s head coach, some of his old tweets — particularly about other NFL teams, such as the Las Vegas Raiders — have been dug up and could potentially be used as bulletin board material for opponents.

Don’t think Jeff Saturday knew he’d be coaching against the #Raiders when he sent this tweet last week… https://t.co/ubTnXMW6dD

After going undrafted in 1998, Saturday eventually landed with the Colts in 1999, where he would go on to play for a decade and win a Super Bowl title along the way. During his 11-year career with Indy, Saturday not only won the 2006 Super Bowl but was also named to two All-Pro teams and six Pro Bowls. Prior to his retirement, Saturday also played one additional season with Aaron Rodgers and the Green Bay Packers in 2012.

Despite their difficult start to the season and current 3-5-1 record, the Colts aren’t quite out of playoff contention yet as they only trail the division-leading Tennessee Titans by two games.