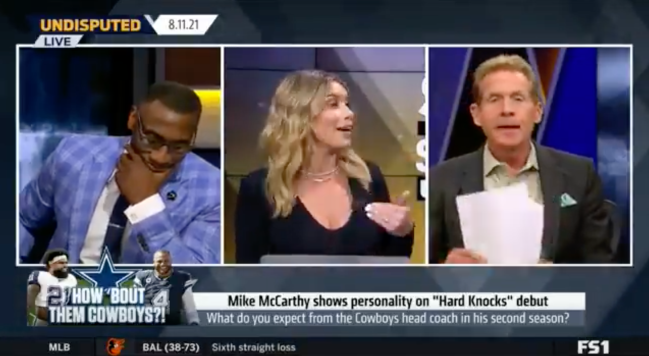 Skip Bayless says some pretty ridiculous things on a pretty consistent basis. None, however, have prompted such a visceral reaction from Jenny Taft as his comments on Wednesday.

Taft, the co-host of Fox Sports’ ‘Skip and Shannon: Undisputed,’ rarely interjects beyond the standard confines of keeping the two fiery host between the lines. She is incredibly intelligent, talented and opinionated, but she is typically more of the moderator than debator.

That was not the case on Wednesday.

While talking about Dallas Cowboys head coach Mike McCarthy’s ability to lead a team, Bayless chimed in with an abysmal take about the veteran coach’s appearance.

“I’m not taking a shot at him with this, but he’s a little heavy,” he said. “I wouldn’t want my head coach in the National Football League to not look the part at all.”

She eviscerated Bayless, saying, “Is every one who’s a good coach as fit as you, Skip? I don’t think that’s a fair shot whatsoever.”

Taft went on to say that she had coaches who didn’t have the perfect physique and doubled down on the fact that she didn’t think Bayless’ shot was warranted.

Naturally, Bayless tried to dismiss the comments, which only led to another vicious, vindicated response.

It was an incredible exchange that had Shannon Sharpe LAAAAUGHING the whole time. He tried to break it up momentarily toward the end before cheering Taft on with a “yes, yes yes,” as she took the show break.

Jenny is the best. pic.twitter.com/V5Cm56Y7SE

Jenny Taft is the best and has received a lot of support online. It will be curious to see if this muddles the Undisputed relationship, though it likely won’t.