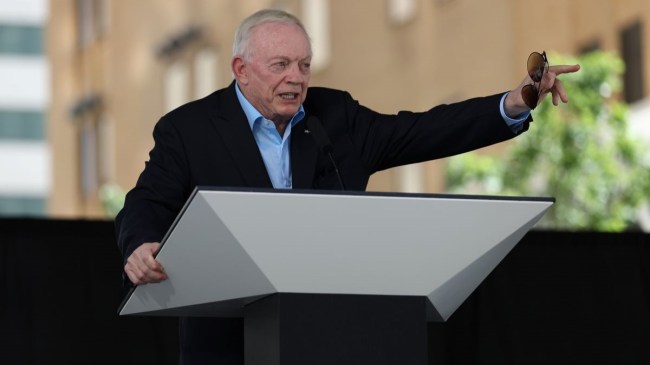 Say what you want about Dallas Cowboys owner Jerry Jones. And, as a Cowboys fan, I have plenty of things I could say. But the man is has a shrewd sense for business.

On the other hand, Washington Commander owner Daniel Snyder apparently doesn’t quite have the same sense. After a laundry list of recent controversies, Snyder took a huge step toward selling the team recently when he attained the services of Bank of America.

Snyder has since said that nothing is definitive and apparently cooled talks about a sale. And Jones seems skeptical that he ever really intended to sell in the first place.

Jones went on Dallas radio station 105.3 The Fan on Friday and discussed the news of Snyder potentially selling. But he doesn’t believe the controversial owner will actually give up a controlling stake in the team.

“I don’t think I was necessarily surprised because he recently acquired a very significant portion of the team,” forty percent from his other partners,” Jones said

“And at the same time, he’s entertaining the building of a new stadium. The acquisition of the partnership interest, as well as the building of the new stadium, is going to require huge economic resources, almost unthinkable economic resources. And so these are the times that you sit down and start your noodling, so to speak, or try to figure out how you’re going to get there and what you’re going to look like when you get there. So this doesn’t surprise me that he set up a time of real, real planning or real thinking about how to manage the economic resources it takes to be where we want the Washington team to be.”

Jones then said that he believes that Snyder will explore a sale. But that any sale is likely to be for a minority stake.

“It sounds like I’m saying that, but I really am saying I bet that all options are on the table, and then you see what might be possible,” Jones said. “And that’s what I think this exercise is. Let’s look and see what our options are here. See what the big interest is, what makes the most sense, in their case, to the Snyders, and then you go from there. It’s one thing to sit there at your table and draw up all your plans and figure out how you’re going to get it done financially. But you in the mirror, in this cases, you need more, and that’s a third party, so he’s out testing the waters.”

Snyder has reportedly faced pressure from other owners to sell. But many believe he’ll need to be forced to do so. Snyder purchased the team in 1999. The purchase came following the death of previous owner Jack Kent Cooke. The Commanders have won just two playoff games since that time.