A Giddy Jerry Jones Seems To Be Buying The Cooper Rush Hype, Says He’s Got The Makings Of A ‘Top Quarterback’ 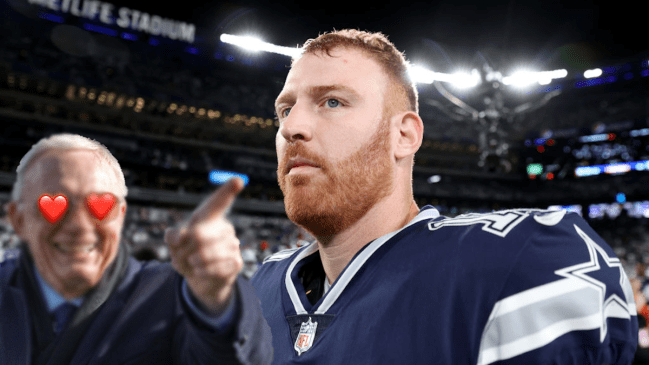 Following a Monday Night Football victory over their NFC East division rival New York Giants, Dallas Cowboys owner Jerry Jones — whose team was all but dead and buried by the NFL world following a Week 1 injury to franchise QB Dak Prescott — seems to be buying into the Cooper Rush hype.

Rush, the 28-year-old back-up that’s been filling in for Prescott since his Week 1 injury, has completed 62.7 of his passes for 514 yards, two touchdowns, and no interceptions. Most importantly, though, his record is 2-0.

Perhaps quite predictably, the ever-optimistic Jones is now quite giddy about both the Cowboys and Cooper Rush, as he told 105.3 The Fan on Tuesday morning that the Central Michigan product has the “makeup of a top quarterback” and believes Rush has been “certainly playing as well as anybody could’ve expected.” This comes after Jones made previous comments about “wanting a quarterback controversy” in Dallas once Dak returns.

Jerry Jones said on 105.3 The Fan that Cooper Rush has “the makeup of a top quarterback, adding, “let me say this he’s certainly playing as well as anybody could’ve expected.”

While it’s hard to imagine that Rush has played well enough (so far) to entirely supplant Prescott as the team’s starting QB, it’s also difficult to argue that the Cowboys’ offense would have looked any better than it did on Monday night had Prescott played in the game. And that, more than anything, is perhaps the biggest knock against him.

Still, with Jones also seemingly rushing Prescott back to the field — his timeline for recovery has been slashed from eight weeks to six weeks to four weeks — odds are that Prescott is reinstalled as the team’s starter as soon as he’s healthy enough. If he doesn’t immediately light it up and losses a couple of games, though, expect genuine calls for a Cooper Rush revival to begin.

In addition to his praise of Rush, Jones also provided an update on Prescott’s recovery.

“I think his progress is nothing short of amazing. It’s a question of whether or not he’ll be able to grip and throw the ball, and we don’t know that,” Jones said.

Jerry Jones on @1053thefan on the latest on Dak Prescott (thumb): "I think his progress is nothing short of amazing." Jones thinks Dak will be able to play in a week or two. "It's a question of whether or not he'll be able to grip and throw the ball, and we don't know that."

RELATED: Dallas Cowboys Fans Debate If Cooper Rush Is Better Than Dak Prescott After Third Straight Win As A Starter