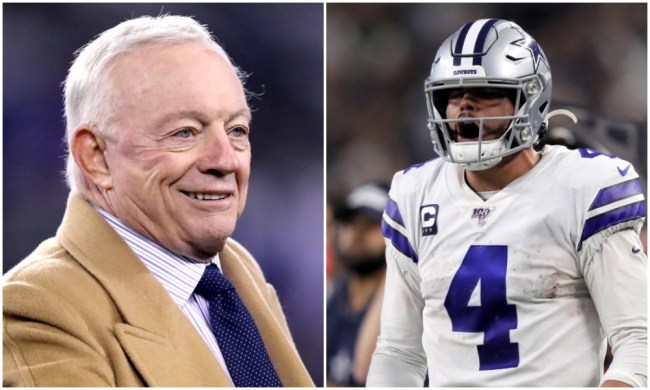 A new week means new drama for the Cowboys courtesy of Jerry Jones’ mouth. Jones joined Shan & RJ on 105.3 The Fan on Tuesday morning to discuss Dallas’ tough 38-31 loss to the Seahawks and gave an interesting answer when asked whether or not he thought there was a gap between the Chiefs and Cowboys.

Instead of giving the generic answer of ‘no, we’re as good as any team in this league, Jones went on to drool over just how great both Patrick Mahomes and Russell Wilson are as athletes. He unsurprisingly brought up how great Tony Romo was as well while taking a jab at his current quarterback, Dak Prescott, specifically about an interception he threw late in the Seattle game.

“[Mahomes] is I think at the highest level right now because of frankly as much as just his natural ability to make plays, his mobility. This guy’s very quick and elusive and can get in and out of situations with his feet and buy time, Jones explained.

“The quarterback we played Sunday [Wilson] is of that kind of nature. He has great ability to get in and out and then make the play. That play Dak made at the end of the game that got intercepted, well, the result of Dak’s ability that let him get that ball off was really great and outstanding. Well, these guys do that — have that ability a lot — they are very quick-footed. They have the unique ability to possibly take their eyes away from the field for a minute and then immediately focus back and see. Romo had that. So he could turn his back and turn around and hand-eye and get it done quick.”

In summary, Jones is of the belief that Mahomes, Wilson, and even Tony Romo have a “unique ability” that Prescott may not possess.

Prescott threw for 472 yards, three touchdowns, and two interceptions against the Seahawks.