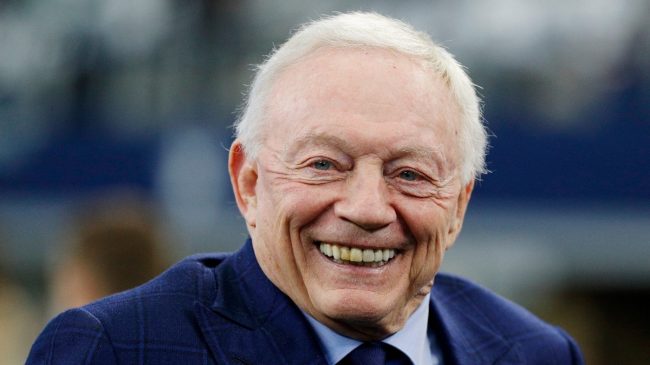 Dak Prescott is attempting to make a quick return from an injured thumb. Meanwhile, Cooper Rush is in place as the starting quarterback for the time being. Rush actually played decently well in Week 2. Even so, the starting role should belong to Prescott. Well, enter Jerry Jones who makes quite the bold statement.

According to Jon Machota, Jerry Jones is open to the idea of a quarterback controversy in Dallas. Although Dak Prescott is a much better QB than Cooper Rush, Jones seemed serious about his comments for the Cowboys.

Let’s be real here. Jones simply wants to win football games. It likely doesn’t matter who is playing on the team, as long as the product leads to victories. The Cowboys’ owner dives further into his comments, as he uses Dak Prescott replacing Tony Romo as his example.

Regardless, the fanbase isn’t having any of it. Cowboys fans are going berserk over Jones’ comments about Dak Prescott and Cooper Rush. And honestly, rightfully so.

Some fans are just wanting some peace and quiet for once.

Jerry, please step AWAY from the mic!

But no controversy at RB.. pic.twitter.com/dYnEtAw6Kw

We have a hard time believing that Dak Prescott is going to lose the starting job to Cooper Rush. Even so, it’s not stopping Jerry Jones from drumming up some drama as the Cowboys prepare for their Week 3 game against the New York Giants.