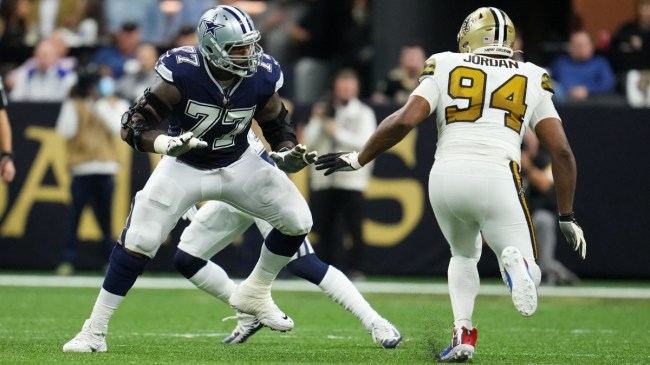 The Dallas Cowboys tried their best to take an embarrassing loss to the one-win Houston Texans on Sunday. But try as they might, Dallas still came away victorious thanks to a 98-yard touchdown drive with time winding down.

But it wasn’t all good news for the Cowboys.

Despite moving to 10-3 on the season and keeping their NFC East hopes alive, Dallas’ awful injury luck continued. Star cornerback Trevon Diggs briefly left the game with a hand injury, while breakout right tackle Terence Steele suffered a knee injury that will cost him the rest of the season and then some.

Steele is in his third year in the league and had emerged as one of the best pass-blocking tackles in the NFL alongside All-Pro Guard Zack Martin.

The injury is exacerbated by the fact that starting left tackle and future Hall of Famer Tyron Smith has missed the entire season with a torn hamstring. Thankfully for Dallas fans, it appears that Smith is ready to return in the nick of time.

With the injury to Steele on Sunday, Peters moved from left guard to right tackle for the game-winning drive. Now it seems reinforcements are on the way.

“As I see it right now, he’ll be playing Sunday,” Jones said.

Smith only recently returned to practice after tearing his hamstring in late August. When he returns, Smith is likely to slot in at left tackle while Tyler Smith moves inside to guard and Peters continues at right tackle.

His return marks a significant boost for Dallas at a pivotal time. The Cowboys are set for a showdown with the 12-1 Philadelphia Eagles on Christmas Eve. A victory for Dallas would move it within one game of the top seed in the NFL playoffs.